(CNN) -- A week ago he was a little-known plumber quietly practicing his trade in northwestern Ohio. Now Joe Wurzelbacher is a talking point in the race for the White House. 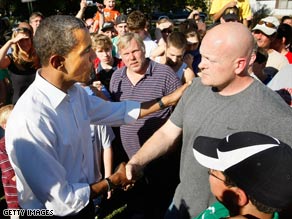 Wurzelbacher, now dubbed "Joe the Plumber," heard his name invoked in whole or in part more than two dozen times during Wednesday's presidential debate in Hempstead, New York, first by Sen. John McCain and then by Sen. Barack Obama.

"I was just really surprised that my name was mentioned," he told reporters after the debate. "I think it helped them get their points across, so I was happy about that."

Wurzelbacher, 34, unintentionally stepped onto the political scene over the weekend when Obama, the Democratic presidential nominee, was campaigning in Holland, Ohio, just west of Toledo. Wurzelbacher was playing football with his son when Obama was campaigning door-to-door in his neighborhood.

Watch Wurzelbacher's take on the candidates »

Local election officials confirmed that Wurzelbacher was registered to vote. They said that he was incorrectly registered as Samuel Joseph Worzelbacher and that he voted for the first time in Pennsylvania's Republican primary on March 4.

The officials said Wurzelbacher's name was misspelled in the voter registration database.

Wurzelbacher is keeping who he plans to vote for to himself but says he leans conservative.

In his exchange with Obama, Wurzelbacher asked if the presidential candidate believed in the American Dream. Wurzelbacher said he was about to buy the plumbing company that he works for and was concerned that Obama would tax him more because of it.

Families making more than $250,000 could see taxes go up under Obama's middle-class tax cut plan, while those making less than $250,000 would not see any increase.

Obama explained his tax plan in depth to Wurzelbacher, saying it's better to lower taxes for Americans who make less money so they can afford to patronize his business.

"I think that when you spread the wealth around, it's good for everybody," Obama told Wurzelbacher.

At the debate, McCain said Obama's plan would give the government the power to redistribute wealth by raising taxes.

Watch a humorous take on the candidates, Wurzelbacher »

Obama countered that both he and McCain want to cut taxes, but that his plan would cut taxes for "95 percent of American families," more than McCain's plan.

"You notice John [McCain] continues to cling to the notion of this guy Joe the Plumber," Biden said on NBC's "Today" show. "I don't have any Joe the plumbers in my neighborhood that make $250,000 a year that are worried."

According to the Bureau of Labor Statistics, the mean annual wage for plumbers, pipefitters and steamfitters in the United States in 2007 was $47,350.

Wurzelbacher is the second "Joe" invoked by the McCain campaign, which is attempting to appeal to so-called average Americans.

Republican vice presidential candidate Sarah Palin referred to "Joe Six-Pack American" in a radio interview this month in which she touted the folksiness that's been central to her political success in Alaska.

"I think they're just not used to someone coming in from the outside saying, 'You know what? It's time that normal Joe Six-Pack American is finally represented in the position of vice presidency,' and I think that that's kind of taken some people off-guard," she told conservative radio host Hugh Hewitt.