(CNN) -- Sen. Barack Obama cautioned supporters Thursday against becoming complacent during the final days leading up to the election, noting he lost the New Hampshire primary despite a lead in the polls. 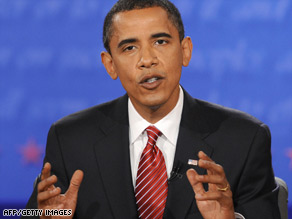 "For those of you who are feeling giddy or cocky and think this is all set, I just [have] two words for you: New Hampshire," the Democratic presidential nominee said during a fundraiser breakfast in New York. "You know I've been in these positions before where we were favored and the press starts getting carried away and we end up getting spanked. And so that's another good lesson that Hillary Clinton taught me."

About 10 hours after debating Sen. John McCain, Obama urged top campaign contributors at the Metropolitan Club in Manhattan to not be overconfident, despite leading in a number of national polls.

A CNN Poll of Polls calculated Wednesday showed him leading 51 percent to 42 percent.

"We've got 19 days," Obama said. "We're going to have to work absolutely as hard as we've ever worked in our lives in order to just to get to the start of what is going to be a very difficult and very challenging but ultimately a very fulfilling four years where we can get this country back on track."

"Well, New Hampshire, last night we had a debate. I think you saw a bit of the McCain attack strategy in action," he said. "But here's what Sen. McCain doesn't seem to understand: With the economy in turmoil and the American dream at risk, the American people don't want to hear politicians attack each other -- you want to hear about how we're going to attack the challenges facing middle-class families each and every day."

Obama urged McCain to "debate our genuine differences on the issues that matter" rather than making the Arizona senator's campaign "all about me."

McCain, speaking at an event in Downington, Pennsylvania, on Thursday, touched on his debate performance.

"We had a good debate last night. It was a lot of fun. ... I thought I did pretty well," he said to loud cheers.

McCain reiterated his position for taking America forward as economists say a recession is all but inevitable.

"We can't spend the next four years waiting for our luck to change ... I'll take us in a new direction," he said. "Our troubles are getting worse, our enemies watch and we have to fight, and that's what I'll do for you ... I'm not afraid of the fight, I'm ready for it."

McCain also urged voters there to help him win Pennsylvania -- a state where a CNN Poll of Polls shows Obama leading his counterpart 50 percent to 40 percent.

McCain also responded to Obama's assertions that his crowds are unruly and use dangerous language to describe the Illinois senator.

"I cannot tell you about how proud I am of you," he said. It was a line that he used in Wednesday night's debate. iReport.com: Obama survived knock-out punch

Obama and McCain are scheduled to speak Thursday night at the Alfred E. Smith dinner, a political tradition that dates back to 1945. It honors the first Catholic ever nominated for president and was begun by Francis J. Spellman, the archbishop of New York's Roman Catholic Archdiocese at the time.

The Republican presidential nominee will also appear on the "Late Show with David Letterman," after canceling an earlier appearance, which left the host fuming.

"They [Obama and Democratic vice presidential nominee Joe Biden] look to the past because they'd rather run against the current administration, it sounds like, and that strategy though, thankfully, it's really starting to wear very very thin," Palin said. "As John McCain reminded Barack Obama last night, if he wanted to run against George Bush, he had his chance four years ago. This year, the name on the ballot is John McCain -- and America knows that John McCain is his own man, he is the maverick."

Though Maine has trended Democratic for nearly two decades, the McCain campaign is making a push in the state's rural 2nd Congressional District, which is allotted one electoral vote independent of how the state votes at large. Despite the McCain camp's efforts, the Republican National Committee has stopped running advertisements in the state.

Palin later traveled to Elon, North Carolina. At an afternoon rally at Elon University, near Greensboro, Palin pressed the audience to stand firm against accusations of negative campaigning, and told them to pay "close attention" to Obama's record.

"It's not mean-spirited and it's not negative campaigning when you call someone out on their record," she said. "So don't let anyone, don't let them make you believe that you're being negative or mean-spirited or unpatriotic or unfair when you are asking about somebody's record, OK?"

After the rally, Palin continued on to a fundraiser at a home in Greensboro.

Biden is traveling to Los Angeles, California, taping appearances on "The Tonight Show with Jay Leno" and the "Ellen Degeneres Show."