(CNN) -- Nancy Reagan, wife of the late President Ronald Reagan, is hospitalized in California after suffering a broken pelvis, according to spokeswoman Joanne Drake. 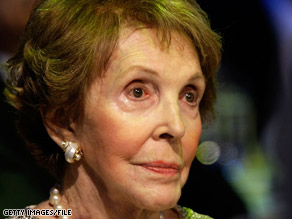 Former first lady Nancy Reagan is shown at an event in the nation's capital in September.

Reagan, 87, is in the Ronald Reagan UCLA Medical Center, Drake said in a written statement Wednesday.

The former first lady fell last week at her home, Drake said, but admitted herself to the hospital only after experiencing "persistent pain." Tests revealed a fractured pelvis and sacrum -- the triangular bone within the pelvis.

Reagan will remain hospitalized for a few days until "doctors are satisfied with her progress," Drake said. Reagan's anticipated recovery time is six to eight weeks, including physical therapy and a modified schedule.

"Mrs. Reagan is in good spirits, especially comforted to be receiving care from talented doctors in a world-class hospital named in honor of her late husband," the statement said.

She previously was hospitalized for two days in February following a fall at her home in suburban Los Angeles.

President Reagan died in June 2004 after a long battle with Alzheimer's disease. Since his death, Nancy Reagan has remained involved with the national Alzheimer's Association and its affiliate, the Ronald and Nancy Reagan Research Institute in Chicago, Illinois. However, she has appeared in public only rarely in recent years.

All About Nancy Reagan • Ronald Reagan