Lawmakers praise 'bold' move by U.S. to buy into banks

WASHINGTON (CNN) -- Lawmakers from both sides of the aisle Tuesday backed a Treasury Department plan to use part of the $700 billion bailout package to buy shares in U.S. banks. 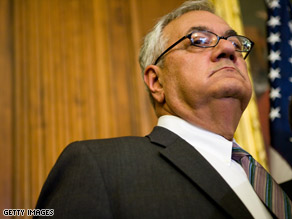 Calling the Bush administration's moves "bold, aggressive, and necessary," Sen. Judd Gregg, a New Hampshire Republican who was instrumental in negotiating the bailout package, said in a statement that "no one is excited by the need to pursue this course, but it is the right action needed at this time."

Under the plan, the Treasury Department would purchase up to $250 billion worth of nonvoting shares in banks. The plan is meant to ease worries that the banks were financially vulnerable and encourage them to start lending again. It also aligns the United States with similar efforts announced by European governments over the weekend.

In addition to buying equity in banks, the federal government would insure small-business bank accounts and stop banks that accepted the federal funds from paying dividends to shareholders, President Bush announced Tuesday morning.

"This is a good start that has the potential to reassure not only the equity markets, but also the broader credit markets, more than auctions [of securities] ever could," said one of the Democratic negotiators of the bailout, Sen. Charles Schumer of New York.

Schumer, however, said he would like to see stronger restrictions on CEO pay.

The plan Bush announced Tuesday is a departure from the original plan crafted by Treasury Secretary Henry Paulson, Federal Reserve Chairman Ben Bernanke and other administration experts, which was to buy up bad mortgage-backed securities that had been clogging credit markets.

Paulson and the administration originally objected to purchasing bank stocks when the bailout package passed nearly a week and a half ago. However, the program to buy up troubled assets could take weeks to get up and running, and, as stocks around the world plummeted, administration officials felt they needed to take immediate steps.

Stock markets around the world rallied Monday after the move by the European governments. The Dow Jones Industrial Average rose nearly 1,000 points on Monday, its largest point gain ever.

Rep. Barney Frank of Massachusetts, the Democratic chairman of the House Financial Services Committee, also backed the plan to buy equity in banks, saying it was "conceptually easier" than implementing the government plan to buy off bad mortgage-backed securities.

"Getting ready to buy the assets is a tricky business," said Frank, who was heavily involved in the negotiations over the details of the bailout package.

Watch Bernanke say 'we will not stand down' »

While saying he would have written tougher restrictions, Frank said the "historic" limits on CEO pay that are part of the Treasury Department's plan marked the first time executive compensation had been limited in the United States.

"I think this is historic as a matter of principle," said Frank, who added, "the notion that [high executive pay] is essential to running the system isn't going to hold up."

All About Economic Issues • U.S. Department of the Treasury