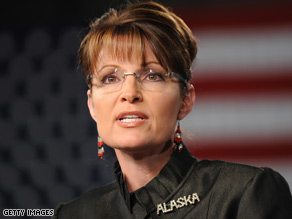 Alaska Gov. Sarah Palin is under investigation for the firing of her public safety commissioner.

"Gov. Palin knowingly permitted a situation to continue where impermissible pressure was placed on several subordinates in order to advance a personal agenda," the report states.

Public Safety Commissioner Walt Monegan's refusal to fire State Trooper Mike Wooten from the state police force was "likely a contributing factor" to Monegan's July dismissal, but Palin had the authority as governor to fire him, the report by former Anchorage prosecutor Stephen Branchflower states.

Watch what led to investigation »

The lawyers representing both Sarah and Todd Palin issued a three-page attack on the investigative report, including the contention that Ethics Act violations can only involve financial motives and financial "potential gain, or the avoidance of a potential loss."

"Here, there is no accusation, no finding and no facts that money or financial gain to the Governor was involved in the decision to replace Monegan," the lawyers said.

Any abuse of power, they said, was on the part of the Legislative Council members, not the Palins.

"Sen. French and Sen. Green may have abused their government power by using public money to pursue a personal vendetta against the Governor, and then agreeing to pursue the PSEA attack against an administration that would not cave in to outrageous union demands."

"Put bluntly, Branchflower completely misapplied the Ethics Act and has instead sought to create a headline to smear the Governor," the lawyers wrote.

Monegan has said he was fired in July after refusing pressure to sack Wooten, who had gone through an acrimonious divorce and custody battle with Palin's sister.

View a timeline of the investigation »

Monegan said he was "relieved" by the findings.

"I believed and had the opinion that I was terminated because I did not fire Wooten," he told CNN. "Now these findings say that that's what happened, so I feel relieved."

Palin and her husband, Todd, have consistently denied wrongdoing, describing Wooten as a "rogue trooper" who had threatened their family -- allegations Branchflower discounted.

"I conclude that such claims of fear were not bona fide and were offered to provide cover for the Palins' real motivation: to get Trooper Wooten fired for personal family reasons," Branchflower wrote.

The Branchflower report states Todd Palin used his wife's office and its resources to press for Wooten's removal, and the governor "failed to act" to stop it. But because Todd Palin is not a state employee, the report makes no finding regarding his conduct.

The bipartisan Legislative Council, which commissioned the investigation after Monegan was fired, unanimously adopted the 263-page public report after a marathon executive session Friday.

About 1,000 more pages of documents compiled during the inquiry will remain confidential because they involve private personnel matters, according to the council's chairman, state Sen. Kim Elton.

"I believe that these findings may help people come to a conclusion on how they should vote" in the presidential election, Elton said.

McCain-Palin campaign spokeswoman Meg Stapleton said Palin would cooperate with the Personnel Board investigation. The Palins' lawyer has said an investigator named by that board wants to question them in late October.

"Gov. Palin was cleared of the allegation of an improper firing, which is what this investigation was approved to look into," she said.

Stapleton went on to say that the Legislature exceeded its mandate in finding an ethics violation. "Lacking evidence to support the original Monegan allegation, the Legislative Council seriously overreached, making a tortured argument to find fault without basis in law or fact."

Rep. John Coghill, a Republican who criticized the handling of the investigation, said it was "well-done professionally."

He said Palin "bumped right against the edges" of the state's ethics laws but that he would give "the benefit of the doubt to the governor, though, at this point."

Palin originally agreed to cooperate with the Legislative Council inquiry, and disclosed in August that her advisers had contacted Department of Public Safety officials nearly two dozen times regarding her ex-brother-in-law.

But once she became Sen. John McCain's running mate, her advisers began painting the investigation as a weapon of Democratic partisans.

Ahead of Friday's hearing, Palin supporters wearing clown costumes and carrying balloons denounced the probe as a "kangaroo court" and a "three-ring circus" led by supporters of Democratic presidential candidate Barack Obama.

The state senator managing the probe, Sen. Hollis French, fueled those complaints with a September 2 interview in which he warned the inquiry could yield an "October Surprise" for the GOP. But Palin's lawyers already had begun pushing for the state Personnel Board to launch its own investigation, calling it the proper legal venue for the matter.

"The report speaks for itself," French told CNN Friday night.