(CNN) -- Amid all the partisan cross talk on iReport.com, one plea that keeps coming through is for presidential candidates John McCain and Barack Obama to stop attacking each other and directly address the issues. 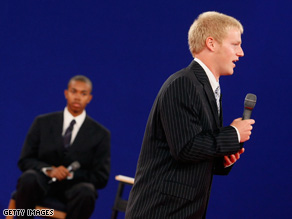 Students stand in for the candidates during a rehearsal Monday at Belmont University in Nashville, Tennessee.

"I would like to hear the candidates speak about real issues and stick to the facts rather than see the 'gloves come off,' " wrote iReporter Sherry Simon of Philadelphia, Pennsylvania.

A fellow iReporter in New Jersey echoed that sentiment.

"I know what I would like to see is more talk about the issues and ... their plans for what they're going to do about some of the issues that are affecting us today -- especially with the economy, the energy problems ... " said Felix VanValen of Willingboro, New Jersey. "I would like to see both candidates really step up to the plate, keep it clean, focus truly on the issues, versus trying to stray away from that." iReport.com: 'Answer the questions that are asked'

An Alaskan iReporter sought to clarify the format for the candidates:

"It's like they don't know what a debate is," said Mabel Ramsay of Mendeltna, Alaska. "No, this isn't a campaign speech. You answer questions and you earn points if you get everything right."

"Compare and contrasting is a concept that we learned in school," wrote Bethea, who served overseas in the first Gulf War and later at NATO headquarters. "Compare and contrast your policies. Tell us your position, why it is better and then let us think it over.

"Do not distract me with useless information that keeps me off the issues," Bethea continued. "This is a major job interview being conducted by the voters, and we want the facts. Answer all questions!"

Another iReporter wanted to remind the candidates that their debate is not a game show.

"It's time to get down to business and be professionals about this," wrote Ed Flanagan of Cleveland, Ohio. "This is supposed to be the presidential debates, not 'Truth or Consequences.' "

Flanagan wants the candidates to act like grown-ups. iReport.com: Who do you think won the debate?

"The American people are sick and tired of all the childish games being played here by both parties and the media," he wrote on iReport.com. "We the people want to hear the real, hard facts of what McCain & Obama have to say about foreign policy. And stay on the subject without slamming each other."