WASHINGTON (CNN) -- Secretary of State Condoleezza Rice said Monday the road for the U.S. in Iraq has been "harder, longer, and more difficult than I personally imagined" and warned that despite some recent progress, success in Iraq is "not a sure thing." 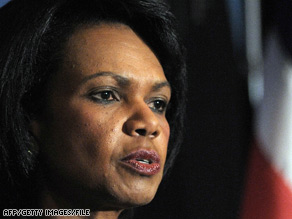 Secretary of State Condoleezza Rice says Iraq has seen a "hopeful but fragile turn of events."

She made those comments at a packed auditorium at the State Department to salute a top general and a top diplomat. She honored Gen. David Petraeus and U.S. Ambassador to Iraq Ryan Crocker with the highest award the State Department gives: The Distinguished Persons Award.

Rice said there has been progress in Iraq, with the economy "springing back to life" and displaced Iraqis returning home. She added that al Qaeda is weaker and the Iraqi government is playing a more effective role. Rice called it a "hopeful but fragile turn of events" but said success in Iraq is "not a sure thing."

Before presenting the award to Petraeus, Rice praised his work in Iraq, calling him an "intellectual warrior and a warrior intellectual." Petraeus, she said, successfully implemented counter-insurgency ideas and negotiated patiently with Iraqi leaders.

Petraeus was promoted to head the U.S. Central Command in the Middle East. His former deputy, Gen. Ray Odierno, took his place in Iraq.

Rice called Crocker a "lion of America's foreign service." Under his leadership in Iraq, she says, the provincial reconstruction teams expanded and he has been instrumental in pushing Iraqi leaders and neighbors to make choices.

Deputy Secretary of State John Negroponte presented Crocker with his award. Both joined the ceremony by video conference from Baghdad.

All About Iraq • Condoleezza Rice