For now, Miers and Bolten don't have to face Congress

WASHINGTON (CNN) -- Former White House Counsel Harriet Miers and President Bush's current Chief of Staff Josh Bolten do not have to cooperate -- at least this year -- with a congressional committee investigating the firings of U.S. Attorneys, a three-judge federal appeals panel in Washington ruled Monday. 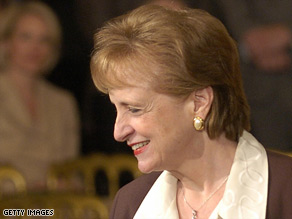 The U.S. Court of Appeals for the District of Columbia said as a practical matter, the case cannot be resolved before the current session of Congress ends, so a new Congress will have to decide whether to pursue the matter.

In June, Democrats controlling the House Judiciary Committee issued a subpoena to Miers seeking to compel her to produce documents and to appear before the committee to testify about the firings of nine federal prosecutors.

The committee also issued a subpoena to Bolten to produce documents.

Both fought the subpoenas, and District Court Judge John Bates ruled Miers and Bolten must honor the congressional demands.

The appeals court reversed that ruling.

"The present dispute is of potentially great significance for the balance of power between the Legislative and Executive Branches. But the Committee recognizes that even if expedited, this will not be fully and finally resolved by the Judicial Branch ... before the 110th Congress ends on January 3, 2009," the ruling said.

House Judiciary Committee Chairman John Conyers, D-Michigan, expressed disappointment with the ruling, and signaled his intention to continue to press the matter next year.

"While the delay caused by this incorrect decision is unfortunate, at the end of the day, I believe Judge Bates' decision will be affirmed and that Harriet Miers and other key witnesses will appear before the House Judiciary Committee," Conyers said.

The first Republican reaction to the decision came from the ranking GOP member of the Judiciary Committee.

"Rather than continue to waste the American people's time and money, I hope that next year House Democrats put partisan politics aside and focus on a real agenda that serves the American people," said Republican Rep. Lamar Smith of Texas.

All About Harriet Miers • Joshua Bolten • U.S. House Committee on the Judiciary