Dodd: 'I have a lot of reservations' about bailout plan

(CNN) -- At a hearing Tuesday before the Senate Banking Committee, federal officials said a bailout is needed immediately for the health of the U.S. economy. 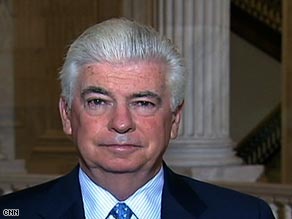 The proposal, if adopted, would amount to the most sweeping economic intervention by the government since the Great Depression.

Before the hearing, Sen. Christopher Dodd, a Connecticut Democrat who is the Banking Committee chairman, spoke Tuesday with "American Morning's" Kiran Chetry about whether the bailout is the right option and what may have contributed to the tumultuous economic environment.

Kiran Chetry: You know talk about waking a sleeping giant -- we have almost 2,000 blog posts on CNNMoney.com about this bailout alone. Many people are outraged about it. They feel the government is spending $700 billion or more to reward bad behavior. What can you do to assure people that this is the right thing?

Sen. Christopher Dodd: Well, I'm not sure it is at this point. That's why we're having this hearing this morning. We'll have Secretary Paulson and Ben Bernanke, the chairman of the Federal Reserve, before the banking committee to explain this plan, why it's necessary and where we go from here. They basically have asked for a blank check of $700 billion for the next several years here to buy a lot of bad instruments out there in these institutions.

See what power Paulson would have if the bailout is approved »

I have a lot of reservations. We're trying to put some safeguards in it. I'm angry as well. This didn't have to happen. It was not a natural disaster. It was a preventable, avoidable situation. We are where we are. Our economy is teetering. We've been warned we're very fragile. There could be a complete collapse. It needs to be straightened out or it could get worse. Pension funds, 401(k)s, jobs could be in worse shape.

Chetry: You have a revised version yourself. We'll get into what you're talking about. Do you believe that in general a bailout needs to happen?

Dodd: Something needs to be done here. I don't know if it's at this magnitude or if ... the specifics of this [bailout plan] make the most sense. But clearly something needs to be done. We can't lurch from one weekend to another with one failed institution after another watching our economy decline, stock market collapse and the price of oil rise. It's not just our own country; this has global implications.

Chetry: Let's look at some of the things you want added or in some cases taken out. Under your [revised version of the bill], you feel there should be some foreclosure assistance -- if Wall Street is getting some help, Main Street should be getting help, too, especially for those struggling homeowners.

You want limits on executive compensation. You don't want CEOs to get millions of dollars in packages for a failed company. You talk about an oversight board over the Treasury. Why are these so important to include, and what if they end up costing more?

Dodd: Well, let me tell you why. First of all, we have almost 10,000 foreclosures occurring every day. For the last 18 months on a daily basis, I've had 65 hearings since July of 2007 begging the administration to do something about the foreclosure problem. They admitted today if you don't deal with 10,000 foreclosures a day -- that's the bulk of these bad debts that are out there -- so you need to do something about that to stop the hemorrhaging. That's No. 1.

No. 2, I won't give a check for $700 billion, for 41 days, to this secretary or any secretary without safeguards built in -- accountability, transparency, oversight. That's just not going to happen.

Watch CNN's Lou Dobbs discuss whether the bailout would work »

Thirdly, taxpayers deserve to be first in line in all of this. I'm not going to write this at the end of the day [and] watch a handful of chief executives walk away with multimillion-dollar contracts. You'll have people storming this building if we don't understand that people are fed up with that kind of behavior.

Chetry: You yourself said this is not a natural disaster, and a lot of people have been asking, "Why didn't Congress see this coming?" In fact, this is a quote from Henry Paulson, the treasury secretary, back in July. This was during the time of the Fannie Mae and Freddie Mac bailout. People thought that was the beginning and the end of this.

He writes: "Remember our economy has got very strong long-term fundamentals, solid fundamentals. Your policymakers are here; regulators were being very vigilant." How can the argument be made that they were vigilant when we see the bottom fall out of the market?

Dodd: Back in 2005, [then-Rep.] Mike Oxley, along with [Rep.] Barney Frank and [Sen.] Paul Sarbanes, tried to do just that. The administration opposed the bill, and it was defeated on a party-line vote here in the Senate.

I know the history very, very well. When you had cops on the beat not doing their job, basically an eight-year coffee break by and large. Where you had legislation on the books and legislation not being enforced. Where you had regulators sitting back as loans were being made with no documentation, luring people into subprime mortgages, predatory lenders taking advantage of the situation that's how this all unfolded. It's not a mystery.

Chetry: ... I want to ask you is there anything in this bill ... to make sure this doesn't happen again. All the things you listed -- the predator loans, everything that was taking place -- is there any room for regulation or more oversight in this bill?

Dodd: Probably not in this bill. We're trying to act quickly. I'm prepared to act quickly, but I'm not going to act irresponsibly. If it takes longer, so be it. We'll have a new election in 41 days, and a new secretary in a matter of five or six weeks, and we can't begin to guess who that might be. Turning over a check of this magnitude not only to this secretary, but his successor, I think would be the height of irresponsibility.