(CNN) -- Democratic presidential candidate Sen. Barack Obama on Friday called for an economic plan for working families, saying, "We cannot only have a plan for Wall Street. 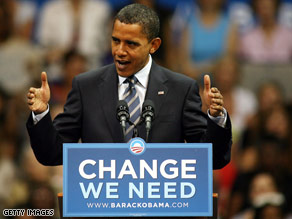 "We must also help Main Street," he said.

While "tough new regulations on financial institutions" are needed, the Illinois senator called for an emergency economic plan for working families.

Obama spoke after meeting with his economic advisers in Coral Gables, Florida. Watch

Obama on Friday also backed administration and congressional leaders' efforts to develop a "a more stable and permanent solution" to the U.S. financial crisis. Watch Obama talk about how working Americans need help in this economy


Obama's statement came after Treasury Secretary Henry Paulson, Federal Reserve Chairman Ben Bernanke and Securities and Exchange Commission Chairman Christopher Cox met with congressional leaders to discuss a plan that would allow banks to get rid of bad mortgage-related assets that have been a drag on their balance sheets.

"What we're looking at right now is to provide the Treasury and the Federal Reserve with as broad authority as necessary to stabilize markets and maintain credit," Obama said.

Investment banks gone bankrupt or bailed out by the government. See exactly what went down in a special report.
Saturday, 6 p.m. ET

"We need a more institutional response to create a system that can manage some of the underlying problems with bad mortgages, help homeowners stay in their homes, protect the retirement and savings of working Americans."

After meeting with his economic advisors, Obama said his team would not present a detailed economic plan at this time, "given the gravity of this situation, and based on conversations I have had with both Secretary Paulson and Chairman Bernanke."

Obama said he would not present his plan until the Treasury and Federal Reserve have presented theirs.

"It is critical at this point that the markets and the public have confidence that their work will be unimpeded by partisan wrangling, and that leaders in both parties work in concert to solve the problem at hand," Obama said.

Later, Obama held a rally, at the University of Miami, which was disrupted by protesters who held up signs saying "Blacks against Obama" and "Obama endorsed by the KKK."

Obama said the protesters could stay and hold up their signs if they stopped shouting, but they were later escorted out after they continued to disrupt the rally.

Obama spoke after Republican presidential candidate Sen. John McCain said Friday morning that he would establish a new agency to deal with the U.S. financial crisis that many experts say is the worst since the Great Depression.

That agency, a Mortgage and Financial Institutions trust, would work with the private sector and regulators to identify institutions that are weak and fix them before they go broke.

"The underlying principle of the MFI or any approach considered by Congress should be to keep people in their homes and safeguard the life savings of all Americans by protecting our financial system and capital markets," McCain told the Green Bay Chamber of Commerce in Wisconsin.

McCain said the agency would be an early intervention program to help financial institutions avoid bankruptcy, expensive bailouts and damage to their customers.

Obama, at the rally in Florida, lashed out at McCain's plan.

"This morning Sen. McCain gave a speech in which his big solution to this worldwide economic crisis was to blame me for it.

"This is a guy who spent nearly three decades in Washington and after spending the entire campaign saying I haven't been in Washington long enough ... he apparently now is willing to assign me responsibility for all of Washington's failure," he said.

Wall Street witnessed the federal government take unprecedented steps this week to stabilize the economy, including the takeover of the insurance giant American International Group Inc. in exchange for an $85 billion loan from the Federal Reserve.

In his speech, McCain blamed the crisis on "the corruption and manipulation of our home mortgage system" and blasted Congress and the administration for not addressing the problems at the two mortgage giants Fannie Mae and Freddie Mac, which he said "led our housing system down a path where quick profit was placed before sound finance."

McCain also blasted his Democratic rival, Sen. Barack Obama, for not working to clean up the "corruption" at Fannie Mae and Freddie Mac. Fact Check: Did Obama 'profit' from Fannie and Freddie?

"We've heard a lot of words from Sen. Obama over the course of this campaign. But maybe just this once he could spare us the lectures and admit to his own poor judgment in contributing to these problems. The crisis on Wall Street started in the Washington culture of lobbying and influence peddling, and he was square in the middle of it."

Although action must be taken to avoid future panics, the Arizona Republican said that ultimately, the economy would have to grow to get through "this tough time for America." McCain touted his economic plan, which includes tax cuts, and again said Obama would increase taxes on Americans who make as little as $42,000.

McCain's charge that his opponent would raise taxes on those making $42,000 is misleading, however. The McCain campaign cites Obama's vote for a nonbinding 2008 budget resolution that outlines budget priorities through 2013 and assumed that President Bush's tax cuts would expire in 2011. Fact Check: Does Obama want to raise taxes?

The Obama campaign says its economic plan would raise taxes only on those making over $250,000.

The two campaigns have traded shots all week, most recently over the government takeover of AIG.

As the economy has dominated the headlines, Obama has widened his lead over McCain, according to CNN's latest "poll of polls." Obama gains in national polls