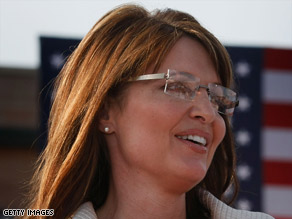 "As state employees, our clients have taken an oath to uphold the Alaska Constitution, and for that reason, they respect the Legislature's desire to carry out an investigation in support of its lawmaking powers," Attorney General Talis Colberg, a Palin appointee, told the investigation's manager in a letter released Wednesday.

"However, our clients are also loyal employees subject to the supervision of the governor."

The chairman of the bipartisan panel that commissioned the probe said Colberg is breaking an agreement his office made a week ago.

"I feel like Charlie Brown after Lucy moved the football," state Sen. Kim Elton, the Democratic chairman of the state Legislative Council, wrote back to Colberg.

Palin once pledged to cooperate with the state Legislature's investigation into the July firing of Public Safety Commissioner Walt Monegan. After his dismissal, Monegan accused Palin of trying to pressure him into firing her ex-brother-in-law, a state trooper who had been involved in an acrimonious divorce from the governor's sister.

Palin has denied wrongdoing. Her allies argue the investigation has become a "partisan circus" since she became Republican presidential nominee Sen. John McCain's running mate, and they argue that any investigation should be handled by the State Personnel Board.

"Moreover, two lawsuits have been filed challenging the legitimacy of the investigation," Colberg wrote. "On behalf of our clients, we respectfully ask that you withdraw the subpoenas directed to our clients and thereby relieve them from the circumstance of having to choose where their loyalties lie."

It was unclear whether the letter covered Palin's husband, Todd Palin, who was among those subpoenaed by the Senate Judiciary Committee last week. Colberg's office did not immediately respond to requests for comment.

The letter was sent to Sen. Hollis French, the Democratic chairman of the state Senate Judiciary Committee, which approved the subpoenas last week. Palin's allies have blasted French over comments he made to ABC News in early September, warning that the investigation into Monegan's firing could yield an "October surprise" for the GOP ticket in the form of criminal charges.

The campaign began holding daily press conferences this week to blast French, Special Counsel Steve Branchflower and Elton. That bipartisan panel voted unanimously to commission the investigation in July, but the McCain-Palin campaign said it has now been "tainted" by partisan politics.

Five Republican state lawmakers went to court Tuesday in Anchorage to shut down the Legislature's investigation, arguing that its leaders "are unable to hold the balance between vindicating their own political interests and the interests of those who are being investigated."

But Elton, a Democrat, called the lawsuit "a distraction."

"I'm comfortable with the notion that the court will review the substance of the suit and find the council acted properly, and that the decisions made during the course of the investigation so far are appropriate and well within the mandate of the council," Elton said in a written statement. The investigation will continue until otherwise ordered, he added.

Other Palin allies filed a similar suit in Fairbanks the same day.

The judge assigned to hear the Anchorage case, John Suddock, recused himself Wednesday. Suddock heard the divorce case between Palin's sister and the trooper at the center of the allegations, Mike Wooten -- and he warned the governor's family against trying to get her then-brother-in-law fired long before the Monegan controversy erupted, according to court records.

Wooten and Palin's sister, Molly McCann, began divorce proceedings in 2005 after four years of marriage. Palin, then a private citizen, and other members of her family filed several complaints about Wooten with the state police, accusing him of threatening his in-laws and other improper conduct.

Wooten was suspended for five days in March 2006, after state police commanders determined he had used a Taser on his 10-year-old stepson "in a training capacity;" drove his patrol car while drinking beer; and illegally shot a moose using his wife's hunting permit.

Palin initially denied that anyone in her administration or family had pressed for action against Wooten, whom she has branded a "rogue trooper." But in August, two weeks before her nomination as a vice presidential candidate, she acknowledged that members of her staff had contacted Monegan's office nearly two dozen times about the trooper. An aide was suspended after being taped telling a state trooper lieutenant that the Palins were concerned that there had been "absolutely no action for a year on this issue."

Monday, the McCain campaign released documents it said bolster its argument that Monegan was fired over budget disputes and "egregious insubordination." The records include e-mails in which Palin advisers complain Monegan was continuing to seek funds for programs the governor opposed.