WASHINGTON (CNN) -- Ever since Sen. John McCain picked Alaska Gov. Sarah Palin for his running mate more than two weeks ago, the Republicans have dominated the headlines. 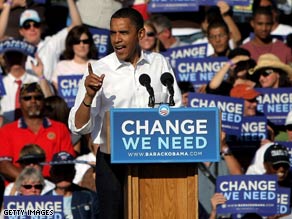 But as the recent failures of major investment banks on Wall Street remind voters of troubles facing the economy, the Democratic ticket of Sens. Barack Obama and Joe Biden has an opening to get back on offense.

"We have reached another major turning point in the campaign. John McCain had all the momentum coming out of his convention with Sarah Palin and dominated the news, [and] was on offense right to the end of this last week," said David Gergen, a CNN senior political analyst. "And there is the opportunity for Obama to seize the momentum back on his side. I don't know if he's going to do it or not. He is trying."

The McCain campaign is not ceding the mantle of change to Democrats, however. It is portraying the Arizona Republican as the best candidate to shake up the Washington bureaucracy that allowed the financial crisis to occur.

"We believe this is a defining moment in the campaign. This is a crisis, and in crisis, leadership rises to the top," said Daniel Clifton of Strategas Research Partners, a firm that analyzes Washington for Wall Street. "So both candidates have the challenge of being able to, one, be a leader in a time of crisis, but, two, fashion a response that will make the American voter feel comfortable."

Watch the economic challenges the next president will inherit »

If the election comes down to the economy, the Democrats may have the advantage, a recent poll by CNN/Opinion Research Corp. suggests.

The poll, conducted September 5-7, found that more than half, 56 percent, of the voters surveyed viewed the economy as the most important issue shaping their vote. Obama was viewed as the better candidate to handle the economy by 52 percent of those surveyed, compared with 44 percent who saw McCain as the better candidate on the issue. The poll's margin of error was plus or minus 4.5 percentage points.

Watch where the candidates stand on the economy »

News on Monday that two more Wall Street institutions had faltered -- 158-year-old Lehman Brothers filed for bankruptcy and Merrill Lynch accepted an offer to be bought out by Bank of America -- allowed the Democrats to go on the attack after being mostly on the defensive when the political debate focused on Palin and whether the phrase "lipstick on a pig" was sexist.

"Who has been the captain at the helm for the last eight years that's driven us into this god-awful economic mess at home and abroad? It's been the Republicans, the philosophy that John [McCain] has adhered to that's driven us in the hole," Biden told CNN on Tuesday. "And when you have a doctor that's committed malpractice, you don't hire him for the second operation." Debate the economy issue. Join The Forum

During a campaign stop Monday in Pueblo, Colorado, Obama used tough language to portray McCain as being out of touch after the Republican's comments that the economy was "fundamentally sound."

Watch as Obama sharpens his attacks »

McCain later appeared to backpedal, saying that it was the American worker who was "fundamentally sound."

But Obama wouldn't relent, saying, "Now come on, Sen. McCain. We know you meant what you said the first time because you've said it before," the Illinois Democrat said. "I think it's good that Sen. McCain is celebrating the American worker today, but it would have been nice if over the last 26 years that he's been in Washington that he actually stood up for them once in a while."

"Anything that raises economic anxiety should help the 'out' party -- in this case, the Democrats. All they have to say is, 'Look who's been in charge for eight years,' " Schneider said.

But in their responses to the troubling Wall Street news, McCain and Palin have worked hard to portray themselves as "mavericks" representing a break from the Bush administration.

In an interview Tuesday with CNN, McCain struck a populist tone, accusing the regulatory agencies overseeing Wall Street of being "asleep at the switch."

"We will come back from this crisis, but right now we are the victim of greed, excess and corruption on Wall Street, which is hurting [workers] very, very badly," McCain said. "It's a very tough crisis, and we are the victim of the violation of the social contract between capitalism and the American citizen."

But as the bad economic news continues to grow, Democrats see an opening.

As CNN's Schneider explained, "It's like an election where nobody represents the incumbent party. Everybody's an outsider. Everybody's for change. A lot of Democrats are asking, 'How can we let the Republicans get away with that?' "