WILMINGTON, Delaware (CNN) -- Sen. Joe Biden was always in charge when he was a boy, his younger sister said. Not because he bullied the other kids, but because he appealed to their "better angels." 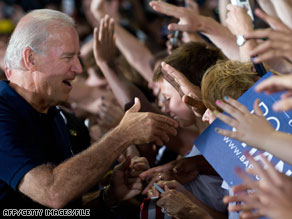 Joe Biden greets supporters at a rally in Battle Creek, Michigan, on August 31.

"He was always the guy who led the pack, and it wasn't because he stood up and pounded his chest and said, 'C'mon and follow me,'" his sister, Valerie Biden Owens, said. "The kids just naturally followed him."

Owens, who is three years younger than the 65-year-old vice presidential candidate, said she was her brother's sidekick when the two grew up in their Scranton, Pennsylvania, neighborhood with their brother and sister.

"I opened my eyes, and he was there," she said. "He always taught that I could stretch. He encouraged me to achieve and try things that I would never have tried before," she said.

Owens said her older brother always tried to make kids feel part of the group because he knew what it felt like to feel excluded.

One kid in high school called him "Dash Biden" because he stuttered and it took him a long time to pronounce his name, Owens said.

"A fierce determination that he was not going to allow an imperfection to hold him back," drove him to overcome the stuttering, she said.

"There are not excuses so he had to figure out a way to overcome it," Owens said. "He practiced, and he used to take verses from Emerson and Yeats and he would memorize them."

Watch how Biden overcame his stutter »

Stuttering would not be the last -- or even the greatest -- challenge Biden would face in his life. Shortly after he was elected to the Senate in 1972 at age 29, Biden's first wife, Nealia, and a daughter, Naomi, were killed in a car accident.

His sons, Beau and Hunter, survived the crash, and Biden took the Amtrak train from Washington to Wilmington, Delaware, daily to take care of them.

After the accident, Biden was "devastated -- his world was gone," Owens said.

But Biden "put one foot in front of the other" and made sure he took care of his children, she said.

"I think that's why he connects with people," she said. "As my dad said, 'It's not how you get knocked down, it's how quickly you get back up.'"

In 1977, Biden married his second wife, Jill, who Owens said "put my brother's life back together."

"She not only married my brother, she married the state of Delaware. She married the Biden family," Owens said. "And the whole time [she] has kept her perspective and her feet grounded. She's a remarkable woman."

Now, Owens said, Biden's ability to unite people and appeal "to the better instinct in human nature" -- the same traits he showed when he was a boy in Scranton -- are why he is a good running mate for Sen. Barack Obama, the Democratic presidential nominee.