(CNN) -- Monday I did an interview in the Election Center with Sen. John McCain's campaign spokesman Tucker Bounds. The interview was about Alaska Gov. Sarah Palin's experience and readiness to be commander in chief. The interview became a bit of a lightning rod. 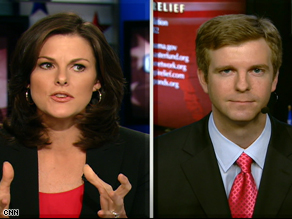 Over the last few days, I have received thousands of e-mails. For those who didn't see the interview, you can read it or view it below.

McCain's campaign got upset about that interview. McCain officials told CNN I had crossed a line and they canceled a scheduled appearance by McCain on "Larry King Live."

You have a right to know the people you are voting for. Our pledge to you on this program is to ask the tough but fair questions and to try to get answers. REAL answers.

Here is a transcript of the interview:

BROWN: We have Tucker Bounds joining us who is a spokesman for the McCain campaign. We want to have an opportunity to talk to him a little bit about this.

And, Tucker, you there?

BOUNDS: Yeah, Campbell. Can you hear me?

BROWN: Good. Yeah. We got you in the chair. I'm glad you're with us. Thanks so much for taking time and joining us tonight. I want to begin by asking, you know, what we've been discussing before you sat in the chair, Gov. Palin sharing a difficult personal story today, the news her unmarried teenage daughter is pregnant. She plans to have the baby, to marry the father. Explain to us when John McCain first learned about this.

BOUNDS: He learned about it during the vetting process before his selection. He did not consider it a disqualifier. Gov. Palin has a long record of reforming Alaska, taking on the establishment for 13 years. She started out as a civic activist in the PTA, went to the city counsel, on to the mayor of her small town, took on big oil in the oil and gas commission in Alaska then to the governor's office where she's made serious bipartisan reforms. That's the reason she was selected. Certainly her personal family matters never disqualified her from serving public office, serving a higher office in a cause greater than herself. That's John McCain's message. She fits it perfectly and we're happy to have her.

BROWN: Tucker, though, this obviously putting this young woman, Bristol Palin, smack in the media spotlight at what's already got to be a very challenging time in her life, I mean, how do you respond to people who wonder why her mother would have subjected her to this kind of scrutiny by accepting this high-profile position?

BOUNDS: I think Gov. Palin understands that these are serious times. We have serious challenges and it's time to shake up Washington. It was the reason she was happy to take John McCain's invitation to go to Washington, make the changes that Americans needs and Americans depend on. She's an expert on energy. She understands we need an all of the above energy approach that includes the alternatives and the renewable fuels. This is an important decision. I think it's dangerous to confuse her civic decision to get involved and make a difference in the country with a family matter --

BROWN: I understand that. I recognize that. In an ideal world, it would be private. You know, this is a presidential campaign. Nothing is private. The world is watching. And if we, you know, as much as everyone might want to give this young woman her privacy, you know that's not going to happen. And so you do risk putting her through an incredibly difficult process by accepting this job if you're her mother. You can't deny that, right?

BOUNDS: The Palin family made clear in their statement that they were hoping and continue to hope that this will be a private family matter. That was their intention from the very beginning. Media inquiries and attention are going to happen in the campaign. They understand that. It's important for us as we have a conversation with voters of how we can change Washington, how we can move forward and take on the big challenges that Americans expect of their public officials that we keep a private matter private among their family. Certainly all of us, certainly the members of the media would expect that from Americans. That's the way we're proceeding.

BROWN: Tucker, foreign policy experience has been a huge issue in this campaign because you guys made it a big issue, pointing out John McCain has far more experience than Barack Obama and nothing in your view is more important than the campaign. I don't have to tell you there's a feeling out there by some that you're not holding your VP pick to your own standard, the standard you define. So explain to us why you think Gov. Palin is ready to be commander in chief.

BOUNDS: Gov. Palin has the good fortune of being on ticket with John McCain who there is no question is the most experienced and shown proven judgment on the international stage. He understands foreign affairs.

BROWN: We know all that about John McCain, Tucker. I asked you about her. We all know the role of the VP as John McCain defined it is to be able to step into the job of the presidency on day one. I'm asking you about her foreign policy experience.

BOUNDS: Yeah, Campbell, there are a number of people supporting Barack Obama's candidacy and feel he's experienced enough to take on the Oval Office. Our feeling is --

BROWN: You're not answering my question --

BOUNDS: Just as much experience as Barack Obama.

BROWN: OK. So does she -- you -- what I'm saying is that you set a different standard by arguing how important it was with John McCain. No one's arguing with you he has much more experience than Barack Obama, so I'm trying to get someone from the campaign to explain to me what foreign policy experience or qualifications she has that would allow her to be ready to be commander in chief if something should happen to Sen. McCain.

BROWN: If I can interrupt for one second because I've heard you guys say this a lot. Can you tell me one decision that she made as commander in chief of the Alaska National Guard, just one?

BOUNDS: Yeah. She's made -- any decision she has made as the commander of the National Guard that's deployed overseas is more of a decision Barack Obama's been making as he's been running for the president for the last two years.

BROWN: So tell me. Tell me. Give me an example of one of those decisions. I'm curious, just one decision she made in her capacity as commander in chief of the National Guard.

BOUNDS: Campbell, certainly you don't mean to belittle, every experience, every judgment she makes as commander --

BOUNDS: As she makes a decision how to equip or how to command the national guard in Alaska, that is more --

BROWN: But Tucker, those are the Pentagon's decision, that's Gen. Petraeus, that's the White House.

BROWN: No governor makes decisions how to equip or deploy the National Guard. When they go to Iraq, those are decisions made by the Pentagon.

BOUNDS: Campbell, on factual basis, they certainly do. In Alaska, if I have an emergency in your state, the National Guard is under the command of the governor. That is more of a command role than Barack Obama has ever had. I would argue John McCain and Gov. Palin between the two of them have far more command experience in military than either of the candidates on the Democratic side.

I do want to argue this is about the top of the ticket. Ultimately when people go into the ballot box and decide between Barack Obama and John McCain, they will decide between John McCain's record of reforming Washington and Barack Obama's rhetoric on the campaign trail, doesn't have a lot of experience, certainly has no command or military experience, which both our candidates have. That's an important distinction I think voters will make the right call in November.

BROWN: All right. Tucker, I'm just going to give it to you, baby. We'll end it there.

BROWN: I appreciate you coming on and taking the time to have this debate. I think it's important. People don't know a lot about her. They want to understand her qualifications as much as possible. We're not beating you up here. We're not trying to. We're just trying to educate ourselves and educate our viewers. So I really do appreciate your time and thank you for your time coming on.