DENVER, Colorado (CNN) -- The last place Kathy Archuleta could have ever imagined she'd spend the first night of the Democratic National Convention in Denver, Colorado, was at a happy hour sponsored by the Republican Party. 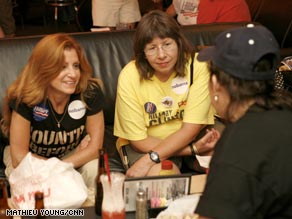 But the 54-year-old Democrat joined several other Hillary Clinton supporters, along with volunteers and officials from John McCain's campaign, at a Happy Hour for Hillary.

The event, sponsored by the Republican National Committee and approved by the McCain campaign, was a chance for McCain and Clinton supporters to come together for one cause: their opposition to Barack Obama's candidacy.

"Four years ago, if you said we'd be at a Hillary happy hour at the DNC, I would have called you crazy. But today is a great opportunity for people who ... agree that Sen. Barack Obama doesn't have the experience to be president of the United States," said McCain campaign regional communications director Tom Kise.

As Michelle Obama was delivering her "One Nation" unity speech on the convention floor several blocks away, more than 100 people gathered at the Paramount Café in downtown Denver.

In a side room, both groups of supporters discussed politics, sports and the convention while sipping cocktails and munching on tacos and a cheese spread.

But there was nothing unified for these Clinton supporters who walked across the aisle or, in this case, the cafe Monday night.

Archuleta, who hails from Denver, has been a registered Democrat all her life -- until now.

"I'm a registered Republican ... for the first time in my voting life," Archuleta said. "No Obama for me. I'm voting for John McCain."

"He reminds me of what the Jimmy Carter era was like. ... If they think Jimmy Carter had it bad, just wait if Obama gets into the White House. That will be bad news in so many ways," she added.

Obama's relative lack of experience in national politics -- long seen as his Achilles heel -- was something that Clinton supporters, Republicans and independents attending the happy hour rallied behind.

"His lack of experience has been demonstrated so painfully every time he opens his mouth just about. ... You cannot have good judgment without experience; that's how you get it," said 58-year-old Marnie Delano of New York.

Adam Edwards, a 20-year-old Clinton supporter, said that although the New York senator "was the stronger candidate," voters may have "just discredited her because of some imagined baggage she carried from her husband's administration."

Leland Kritt, a McCain supporter who made his way to Denver from Los Angeles, California, said Obama's message of 'change' is simply flawed.

"The simple fact remains, change will occur anyway, no matter who the president is. For every man, woman and child, change will happen. Question is: who is best able to handle that change?" the 51-year-old Republican said.

Shortly after the announcement, the Arizona senator's campaign released a TV ad in several swing states that used video of Biden criticizing Obama as too inexperienced to be president.

And just as the Democrats' convention was getting started in Denver, both the McCain campaign and the Republican National Committee unveiled four TV ads geared toward Clinton supporters.

The most recent McCain ad involves the famous Hillary Clinton "3 a.m." spot and will be aired during the convention. The 30-second spot uses footage from Clinton's original ad and declares, "Hillary's right."

Clinton, speaking to member of the New York delegation in Denver on Monday, said she was opposed to Republicans using her words against Obama.

Meanwhile, a CNN/Opinion Research Corp. poll taken August 23-24 found that 56 percent of registered voters have a favorable opinion of Hillary Clinton, with 40 percent having an unfavorable view. The margin of error was plus or minus 4.5 percentage points. iReport.com: Are you in Denver?

So while Clinton's die-hard supporters are in Denver in full force, the poll showed that her negative approval rating is very high among registered voters nationwide.

But there is some bad news for Obama. The poll showed that 66 percent of Clinton supporters -- registered Democrats who want Clinton as the nominee -- are now backing Obama. That's down from 75 percent in the end of June. Twenty-seven percent of them now say they'll support McCain, up from 16 percent in late June.

And nowhere was that statistic more prevalent than at the RNC-sponsored happy hour for Hillary.

Clinton supporters-turned-McCain converts at the event were not just angry at Obama's campaign; they're furious with the Democratic Party's nomination process this year.

"The DNC really pushed [Barack Obama] on us. Now they've left us with two choices: somebody who has no substance or a Republican," said Jessi Cleaver, 35, of New York. "And these are terrible choices, and they worked hard to select this candidate. ... We're watching the DNC pick this candidate for us."

It's a point Mitt Marr agreed with.

"We're taking a stand and not backing down. It's 'we the people,' not 'we the DNC.' We are standing up for what is right. I know in my heart," said the woman from Sugar Land, Texas, who would give her age only as 50-something.

As the convention heats up and tensions remain high over how to make sure Clinton's 18 million or so votes are counted, supporters will rally by her side, even if their pick in November is her enemy.