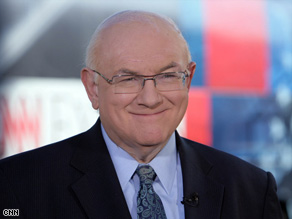 (CNN) -- Conventions are relics. They don't decide the nominees anymore -- that's been turned over to primary voters. No one pays much attention to party platforms except a few ideological activists.

So why do we still have them? Two reasons: money and publicity.

The actual convention business -- nominations, acceptance speeches, platforms -- could easily be completed in a weekend. But the process is stretched out over four days to provide plenty of time for fundraising.

The convention has evolved into a four-day "infomercial,'' a slick production aimed at promoting the candidate and giving the ticket a bounce in the polls.

In 1972, it was sensational news when the press discovered a detailed, minute-by-minute script for the Republican convention. The Democrats had no such script. The 1972 Democratic convention was far more democratic -- and chaotic. The nominee ended up giving his acceptance speech in the middle of the night, with disastrous results.

Now both parties try to control every minute of the convention as if it were a television show -- because it is a television show. Delegates are props. They cheer and applaud and provide color (funny hats). iReport.com: Share sights and sounds from DNC

The last thing convention organizers want is actual news made. But somehow news usually manages to break out.

Singing "Kum Ba Ya''? Not likely. They'll find plenty of things to squabble over. Obama plans to deliver his acceptance speech in a stadium with 76,000 seats instead of the conventional hall. Here's one reason: an audience of 74,000 Obama fans will swamp 2,000 Clinton delegates.

Republicans have two big worries for their convention. One is what to do with President Bush and Vice President Cheney -- two of the most unpopular figures in American politics. Bush and Cheney have to be given time to say farewell to their party.

When they do, Sen. John McCain wants to be far away. Otherwise, he would be expected to raise arms with Bush and Cheney -- and provide a photo that would live forever in Democratic campaign propaganda.

Convention organizers want to make sure the platform process, like the Bush and Cheney speeches, gets as little notice as possible.

Nevertheless, if you look beyond the hoopla and the bombast at the conventions, a real story will be going on. It is about the remaking of the Democratic and Republican parties.

The Democratic Party has been the Clinton party for sixteen years. Now the Obama campaign wants to remake it into the Obama party.

The process started just after Obama claimed the nomination. He moved major party operations from Washington to Chicago, where his campaign is headquartered. He ordered the party to stop accepting contributions from groups that lobby the federal government.

Remember "triangulation''? And they were winners --until this year.

This year, Hillary Clinton was defeated by something the Clintons didn't see coming -- a political movement.

A movement is held together by more than calculation and strategy. A movement is based on belief and belonging. People support a campaign, but they belong to a movement.

Movements can be difficult to elect. They alienate "non-believers'' who don't feel they "belong.''

The Democratic convention will be the first formal meeting of the national Obama movement. We'll be watching to see how the Obama campaign tries to reshape the party's image and message -- and whether the Clinton delegates put up resistance.

Now the McCain campaign wants to remake it from a Bush party to a McCain party. That means limiting the influence of movement conservatives who have controlled the party for nearly 30 years.

McCain wants the Republican Party to be a party of reform, not just conservatism. That way he can look like a candidate of change instead of a third term for George W. Bush. That's a calculation and a strategy. It's also a challenge to conservatives.

McCain will try to remake the Republican Party in his image, and conservatives may resist. That will provide much of the drama -- and the news -- at the Republican convention in St. Paul, Minnesota.