Clinton's name to be put in nomination at convention 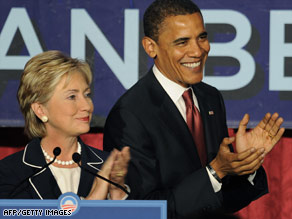 Former rivals Sens. Hillary Clinton and Barack Obama have called for unity at the Democratic convention.

The move is seen as a bid to heal the wounds of the bitter primary season.

Obama's campaign encouraged Clinton to put her name in roll call "as a show of unity and in recognition of the historic race she ran and the fact that she was the first woman to compete in all of our nation's primary contests," according to a statement from the Clinton and Obama press offices.

"They are both committed to winning back the White House and to ensuring that the voices of all 35 million people who participated in this historic primary election are respected and heard in Denver," the statement said.

Watch why Clinton will get a vote at DNC »

Both sides came to the mutual decision that the move was the best path, a Democratic source with knowledge of the discussions said.

A Democratic Party operative familiar with convention plans said the move would bring "peace in the kingdom."

The source added the Obama campaign "always knew it would probably have to happen." "They have known since the day she dropped out that she wanted this 'for history,' " the operative said.

The senator from New York is scheduled to speak at the convention on the second night -- August 26. It's also the 88th anniversary of the day women were granted the right to vote.

Former Virginia Gov. and Senate candidate Mark Warner is delivering the keynote that night, and former President Clinton is set to speak the following night.

Both of the candidates have called for party unity, but Clinton also has made it clear that she wants the voices of her supporters heard.

Many die-hard Clinton fans have been hoping that her name would appear on the ballot.

At a gathering last month in California, Clinton suggested that doing so could provide a "catharsis" for her supporters.

"I happen to believe that we will come out stronger if people feel that their voices were heard and their views were respected," Clinton said.

The former first lady immediately shot down the notion that she might try to upstage Obama.

"Since the delegate count is so close ... what if you are called up for nomination and what if you do win by a narrow margin?" a questioner asked her at the event.

The Democratic National Committee has detailed rules on placing a candidate's name in nomination. In short: