WASHINGTON (CNN) -- Top congressional Republicans Thursday called for a special session of Congress to deal with the oil crisis plaguing the country. 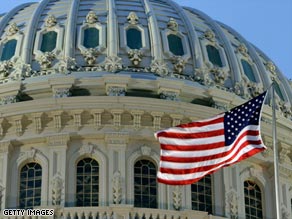 Several Congressional Republicans are calling for a special session of Congress.

President Bush called on Congress Wednesday to allow offshore oil drilling, saying the need to lower crude and gas prices made it urgent.

Lawmakers are debating legislation to allow drilling for oil along the U.S. coastline, particularly in Florida and California.

The Senate, which is set to begin summer recess after this week, has been gridlocked for days on various energy bills.

Congressional Republicans said they want an open debate and accuse Democrats of trying to limit amendments to avoid a vote on offshore drilling -- an assertion the Democrats deny.

Rep. Mike Pence, R-Indiana, said it's not fair to Americans who "won't get a vacation from high gasoline prices so Congress shouldn't take a vacation until we vote to lessen our dependence on foreign oil."

Pence said that if House Speaker Nancy Pelosi wouldn't keep the House in session to vote, he urged the president to call an immediate special session of Congress.

"It's a shame on Congress that we are going in recess when we have to deal and have not dealt with the issue of high energy prices," said Rep. Ted Poe, R-Texas, on Thursday.

"It appears the Democrats are desperate to deny real gas price relief ... they are apparently united behind the misguided policy of the presumptive Democratic nominee for president who says don't provide any new sources of supply," he said.

Democrats, meanwhile, are fighting back against the Republicans' criticism.

"This isn't about production as Republicans keep wailing on the floor. ... This is about Republicans protecting record oil company profits, not production," said Rep. Bob Menendez, D-New Jersey. "This is not about helping the American consumer, it's about one last chance to give out more handouts to Big Oil."

"All of a sudden after a lifetime opposing offshore drilling now you are for drilling and $1.1 million dollars ends up in your coffers ... I think the oil companies understand very clearly where their bread is buttered."

Pelosi on Wednesday said the president was perpetrating a "hoax" by pushing for more offshore oil drilling.

"The president has failed in his economic policy, and now he wants to say, 'but for drilling in protected areas offshore, our economy would be thriving and the price of gas would be lower,'" Pelosi said. "That hoax is unworthy of the serious debate we must have to relieve the pain of consumers at the pump and to promote energy independence."

Just over half say that the Bush administration and the war in Iraq are major causes of high fuel prices. Just as many cite the ban on additional offshore drilling.

But one group gets relatively little blame. Only about one in three Americans, 31 percent, say that the Democrats in Congress are a major cause for gas prices.

The poll had a margin of error of plus or minus three percentage points.

Bush criticized Democrats who he said are refusing to allow a vote on legislation to expand domestic oil drilling.

"American drivers are counting on Congress to lift the ban and so are American workers," Bush said.

Senate Majority Leader Harry Reid, D-Nevada, had offered a proposal to Republicans that would allow a vote on a measure that would lift the drilling ban.

In a statement issued Wednesday, Reid said the Senate should not take advice from "the president with the worst energy record in generations."

Reid suggested the president instead focus on releasing oil from the strategic oil reserve, speeding up production in areas already open for drilling and cracking down on oil traders.

"He has shown no interest in doing anything but continuing more of the same failed policies that have produced the highest oil and gas prices ever," Reid said.

Reid on Monday offered Republicans a chance to vote this week on four GOP-backed amendments, including one that would expand offshore oil drilling.