Commentary: Still looking for a candidate I can support 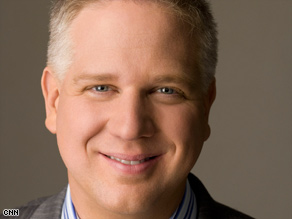 Glenn Beck says he can't vote for Obama and doesn't think McCain is a conservative, so he's still looking

NEW YORK (CNN) -- I believe this election has put a lot of people in a strange place. It's a place that I've never personally been before. Put simply, I couldn't care more, and I couldn't care less.

When I sit back and objectively look at the times we're in, with our economic problems, gas prices hovering around four bucks, banks failing, the border out of control, the rise of China, the re-rise of Russia, Islamic extremism, the dollar weakening, (even lots of Bennigan's restaurants closing down!), this may very well be the most important election we've ever faced. But this year just feels different. I'm equal parts enraged, indecisive and disaffected.

One thing that I have decided is that Democratic contender Sen. Barack Obama isn't the guy for me. If you watch my show on Headline News, you may have picked that up already. Don't get me wrong, I want hope and change just as much as the next guy, but I think Barack and I are hoping for different kinds of change. To me, his vision for America appears to be somewhere between Sen. Hillary Clinton and Karl Marx. Being a conservative, that's definitely not what I'm looking for. iReport.com: Tell us why you are an undecided voter

But the frustrating thing is no one else seems to be what I'm looking for either. While I like Republican candidate Sen. John McCain on certain issues, he's not really a conservative. He's put his name on too many pieces of legislation that are downright antagonistic to the right. McCain-Kennedy on illegal immigration. McCain-Feingold on campaign finance reform. McCain-Lieberman on global warming. He's massively frustrating on far too many things to make voting for him anything other than an excruciating-eating-a-spider-Fear-Factor type of experience. You close your eyes, you pull the lever and you cringe when you think back about it.

Some of my friends say that McCain is simply the lesser of two evils. He's not great, but he's all we've got. And when you're up against Barack Obama, not so bad looks really good. While, by my standards, I don't doubt McCain would be less damaging for the next four years, he might be worse for the next four decades.

The scenario that keeps running through my head goes like this: John McCain somehow wins; the major problems we're likely going to face regardless of who is elected kick in; McCain gets blamed; and conservative ideals take the fall for McCain's decidedly nonconservative policies. Plus, it's always been my theory that you should be voting for something, not against something. Trying to win an election by just being against something is usually fruitless; see John Kerry.

But what are the other options for someone like me? Should I vote for a third-party candidate? While this year's election doesn't appear to be providing one big third-party candidate who will approach 20 percent of the vote like Ross Perot, it might be the broadest collection of candidates in quite a long time.

In case you're having trouble keeping track; here's a primer. There's the ever-present Ralph Nader, who is usually good for a percent (and a laugh) or two. Bob Barr, the former Republican congressman, will likely get more votes than any libertarian in history. While he might make the difference in a state or two, the biggest libertarian figure on the planet, Texas Rep. Ron Paul, seems equally likely to endorse Chuck Baldwin, the Constitution party candidate. Confused yet? Well, don't forget former Rep. Cynthia McKinney, whose Green Party candidacy I fully and unequivocally support just based on its sheer entertainment value. You can even find candidates for the Socialist Party USA, the Socialist Workers Party and the Prohibition Party. Solely for the fun factor, I support at least one debate (or cage match) with all of them.

But with more information, and more candidates than ever before, I find myself in some ways less interested. With no clear answer for what's best for the country, part of me has a strong desire to just withdraw from it all. Washington is so eternally and impossibly mangled, even if I found the perfect candidate who agreed with everything I believe in, would I be dumb enough to think that they wouldn't fall victim to the beltway? It's like going to see a Ben Affleck movie: I'm walking in knowing I'm going to be disappointed.

So, what does all of that tell you? I don't know. For an opinion column, I realize I'm offering up more questions than answers. In the end, the only true answer I can find keeps me coming back to the beginning: We the people. That's where the founding fathers placed the power in this country. No matter who wins the election, they have to remember they work for us. That's the principle that has given us such a remarkable past, and it's what we must remember to ensure an even more promising future.

As far as who to vote for -- I'm not sure. Hopefully, I'll come up with an answer or two by, say, early November.