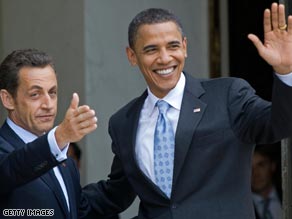 "Part of getting that right is having the Europeans engaged and involved in this same battle that we're involved with," the Democratic presidential contender told CNN's Candy Crowley in Berlin, Germany, where he had addressed an estimated crowd of 200,000 a day earlier.

Obama's multination trip, which has included stopovers in Afghanistan, Iraq and Israel, is aimed at bolstering his foreign policy credentials. The one-term senator has been criticized as inexperienced by Republican rival John McCain.

Obama landed in France on Friday for a meeting with President Nicolas Sarkozy. He ended Friday in the UK where he was scheduled to meet Prime MInister Gordon Brown and opposition leader David Cameron.

Asked what message his traveling abroad three months before the election sent to Americans, Obama said getting commitments from the United States' partners would help address some of the domestic issues Americans are facing.

Obama also said his trip was aimed at reasserting American respect in the world: "I wouldn't underestimate the degree to which people in Ohio -- or people in Michigan or Missouri -- recognize that our long-term safety and our long-term security is going to depend on how we can interact with key allies."

Obama, who says he is making the trip as a U.S. senator rather than as a candidate for the White House, held a joint news conference Friday with Sarkozy.

They pointed out that when Sarkozy visited the U.S. before he was elected president he met only two senators -- Obama and McCain.

On the campaign trail in the United States, Obama regularly contrasts his foreign policy view against that of President Bush.

But in France he did not go that far, saying he was respecting the tradition that "you don't criticize a sitting president while overseas."

"I can say affirmatively an effective U.S. foreign policy will be based on our ability not only to project power, but also to listen and to build consensus," Obama said.

"The U.S. and Europe can and will achieve far more when we join in a common cause," he added.

Obama's address to Berliners earned a warm but cautious response from German newspapers Friday, with several noting that he had called for a greater NATO contribution in Afghanistan. Read what German newspapers made of Obama's speech

Obama used the speech to warn about the dangers of allowing new walls to come between the U.S. and its allies, highlighted what he saw as common transatlantic goals while also accepting the differences of the Bush years.

"People of the world -- look at Berlin, where a wall came down, a continent came together, and history proved that there is no challenge too great for a world that stands as one," he said.

"While the 20th century taught us that we share a common destiny, the 21st has revealed a world more intertwined than at any time in human history."

He said the fall of the Berlin Wall offered hope as the world faces up to international challenges such as terrorism, climate change and rogue nuclear-armed states.