NEW YORK (CNN) -- Just when you think you've heard everything in this race for the White House, along comes something truly surprising. Such was the case on Thursday's "American Morning." 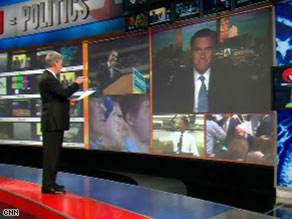 McCain hopes to paint Obama as a politician who puts party and self-interest above the needs of the nation, claiming that Obama has "never been a part of a bipartisan group that came together to solve a controversial issue."

When I pointed out that Obama reached across party lines to work with Sen. Richard Lugar, R-Indiana, on a nonproliferation measure, and with Sen. Gordon Smith, R-Oregon, on increasing gas mileage requirements, Romney shot back, saying that, "Actually, on both cases, you're talking about two liberal positions, nonproliferation as well as the gasoline mileage."

It struck me as rather odd -- having covered five years of the Bush administration as a White House correspondent -- that the governor would view nonproliferation as a "liberal" issue. I seem to recall a little ditty called the "Proliferation Security Initiative," launched by President Bush on May 31, 2003.

The aim of the initiative is to enlist the nations of the world to "stop trafficking of weapons of mass destruction, their delivery systems and related materials to and from states and non-state actors of proliferation concern."

Whether the program is a success is very much in question (though the administration claims it is), but I've never heard anyone call it a "liberal" position.

So what about the Lugar-Obama measure -- conceived as an adjunct to the Proliferation Security Initiative? Did it qualify as "liberal?"

Here's how Sen. Lugar's office described it in a press release: "The Lugar-Obama initiative enhances U.S. efforts to destroy conventional weapons stockpiles and to detect and interdict weapons and materials of mass destruction throughout the world."

Lugar has a bit of a middling score from the American Conservative Union (a lifetime rating of 78.02 on a scale that goes to 100) and has been called a "moderate' from time to time. But "liberal?"

"National security is not liberal," he told me, "at all."

It's true that Democrats have passed two of the biggest nonproliferation measures -- the 1968 Non-Proliferation Treaty and the 1978 Non-Proliferation Act -- but every president since Dwight Eisenhower has sought to curb the spread of either nuclear weapons or the missiles to deliver them.

On the Obama-Smith measure, Romney is on safer ground. Improving gas mileage has certainly been a favorite stick with which the Democrats like to beat up Republicans.

But didn't McCain just propose new measures to increase fuel efficiency? Gas at 4 bucks a gallon has a way of shaping the political mind.

With so much on the line in this election, we'll probably hear plenty of wild charges thrown back and forth. Some, it seems, will be a little wilder than others.