McCain attacks Obama for opting out of public financing 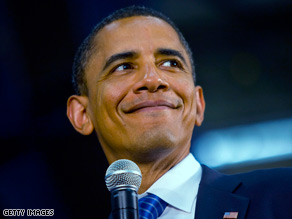 Obama told supporters in an e-mail message Thursday that he would not accept about $85 million in public funds when he becomes the Democratic presidential nominee.

In the e-mail, Obama said the public campaign financing system allowed "special interests [to] drown out the voices of the American people" and asked his supporters to "declare our independence from a broken system."

McCain said that Obama's move to drop out of the system "should be disturbing to all Americans" and that he may decide to opt out, too.

"Sen. Obama's reversal on public financing is one of a number of reversals ... that he has taken," McCain said while touring flood-damaged parts of Iowa.

"This election is about a lot of things, but it's also about trust. It's also about whether you can take people's word. ... He said he would stick to his agreement. He didn't."

He said his campaign will reconsider whether to opt out as well.

"We''l have to reevaluate in light of his decision," he said. But he said he leans toward taking public money.

But Rep. Rahm Emanuel, an Obama supporter, argued that the Democrat had "more than realized the objective of public financing" by setting up a system to accept small donations over the Internet.

"It has given the American people a voice in our political process and has forever changed politics in this country by inspiring record numbers of Americans to participate in bringing change to Washington," Emanuel said.

Despite the heated back-and-forth, CNN senior political analyst Bill Schneider said it is unlikely the controversy will influence voters.

"I'm not sure it's a big deal for most voters. There's not a lot of support for the public financing system." Schneider said. "About a year ago, the polls asked people if they supported the idea that candidates and campaigns should be financed by taxpayer money ... and most persons said no.

"They like the idea of financing campaigns through small contributions from a lot of individual contributors, which is what Obama has done," he said.

Obama would be the first major presidential candidate to drop out of the modern campaign financing system for the general election since its creation in 1976 in the post-Watergate era.

Under this system, candidates agree to spend only the public funds and cannot raise or spend money directly obtained from individuals.

Because he has decided not participate in the system, Obama will be able to spend an unlimited amount of money during the general election.

The two camps also bickered Thursday over whether they had held negotiations on public financing before Obama's move to drop out.

Obama counsel Bob Bauer said he discussed the public funding issue for 45 minutes with Trevor Potter, his McCain counterpart, on June 6 when they met to talk about a possible town-hall appearance between the candidates.

Potter said the two "spoke in general terms about the public financing system, with Bob outlining reasons it could be considered 'broken' or irrelevant in 2008, and I explaining why Sen. McCain remained committed to it and thought it was good for the country."

Given his record-breaking ability to raise donations over the Internet, the Illinois Democrat probably will be able to raise more than and outspend the presumptive GOP nominee.

Since January 2007, Obama has raised more than $272 million, including nearly $31 million in April. During that time period, McCain has raised less than half that amount, roughly $100 million. In April, the Arizona Republican brought in about $18 million.

After that ruling, spokesman Bill Burton said, "Sen. Obama is pleased the FEC took this important step in preserving the public financing system, which is why he sought the opinion. If Sen. Obama is the nominee, he will aggressively pursue an agreement with the Republican nominee to preserve a publicly financed general election."

But after his primary victories on Super Tuesday, McCain wrote to the Federal Elections Commission announcing his intent to withdraw from the program.

But the FEC has four vacancies -- and no quorum -- to vote on whether to allow McCain's withdrawal. And federal election rules say that a candidate who uses the matching funds as collateral cannot withdraw from the system. The Democratic National Committee has filed a complaint with the FEC, but the lack of a quorum has stalled assessment of the complaint.

Obama, meanwhile, asked supporters Thursday to "declare our independence from a broken system, and run the type of campaign that reflects the grass-roots values that have already changed our politics and brought us this far."

The Democrat also attacked McCain and Republicans for taking money from lobbyists and political action committees, and he faulted McCain for not checking the campaign spending of conservative groups independent from his campaign.

"We've already seen that he's not going to stop the smears and attacks from his allies running so-called 527 groups, who will spend millions and millions of dollars in unlimited donations," the e-mail said, referring to independent political advocacy groups that often purchase issue ads independent of the presidential campaigns.

These groups operate under Section 527 of the Internal Revenue Service tax code.

CNN's Rebecca Sinderbrand and Dana Bash contributed to this report.