WASHINGTON (CNN) -- The White House said Wednesday that it was "puzzled" by a former spokesman's memoir in which he accuses the Bush administration of being mired in propaganda and political spin and at times playing loose with the truth. 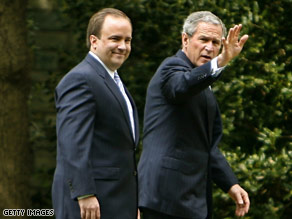 In excerpts from a 341-page book to be released Monday, Scott McClellan writes on the war in Iraq that Bush "and his advisers confused the propaganda campaign with the high level of candor and honesty so fundamentally needed to build and then sustain public support during a time of war.

"[I]n this regard, he was terribly ill-served by his top advisers, especially those involved directly in national security," McClellan wrote.

Read excerpts from the book »

"Scott, we now know, is disgruntled about his experience at the White House," Perino said. "For those of us who fully supported him, before, during and after he was press secretary, we are puzzled. It is sad. This is not the Scott we knew."

Former White House counselor Dan Bartlett McClellan's challenged his assertion in his book that President Bush did not review all the facts before going to war in Iraq, saying, "I don't think he was in a position to know this."

"Scott McClellan was not the press secretary. He was the deputy press secretary who dealt with domestic issues," said Dan Bartlett, a former White House counselor. "So, he would not have even been really have access to the types of meetings and deliberations that the president participated in."

Former White House spokesman Ari Fleischer, McClellan's predecessor, said in a statement that "if Scott had such deep misgivings, he should not have accepted the press secretary position as a matter of principle," he said. Read more reaction from McClellan's former colleagues

A Clinton White House insider said McClellan's account has credibility because his long proximity to Bush gave him a window on how the war was prosecuted, and he may now be having pangs of conscience.

"I think he has come to the conclusion -- as two-thirds of the American people have -- that it was a bad mistake of judgment on behalf of the president," said John Podesta, a former chief of staff for President Clinton.

In a brief phone conversation with CNN on Tuesday evening, McClellan made clear that he stands behind the accuracy of his book. McClellan said he cannot give on-the-record quotes because of an agreement with his publisher.

"One of the worst disasters in our nation's history became one of the biggest disasters in Bush's presidency," he wrote. "Katrina and the botched federal response to it would largely come to define Bush's second term."

Early in the book, which CNN obtained late Tuesday, McClellan wrote that he believes he told untruths on Bush's behalf in the case of CIA agent Valerie Plame, whose identity was leaked to the media.

Rove and fellow White House advisers Elliot Abrams and Lewis "Scooter" Libby were accused of leaking the name of Plame, whose husband, former U.S. ambassador Joseph Wilson, had gone public with charges the Bush administration had "twisted" facts to justify the war in Iraq.

Libby was convicted last year of lying to a grand jury and federal agents investigating the leak. Bush commuted his 30-month prison term, calling it excessive. At the time, McClellan called the three "good individuals" and said he spoke to them before telling reporters they were not involved.

"I had allowed myself to be deceived into unknowingly passing along a falsehood," he wrote. "It would ultimately prove fatal to my ability to serve the president effectively."

McClellan wrote he didn't realize what he said was untrue until reporters began digging up details of the case almost two years later.

He announced he was resigning in April 2006 at a news conference with Bush.

"One of these days, he and I are going to be rocking in chairs in Texas talking about the good old days of his time as the press secretary," Bush said at that conference. "And I can assure you, I will feel the same way then that I feel now, that I can say to Scott, job well done."