Four horrible ways to get him to pop the question

(The Frisky) -- Maybe it's because we're forced to deal with our families more than usual during the holidays, but these can be trying times for women without rings on their wedding fingers. 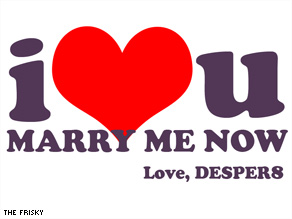 If you need to demand a proposal from a guy, he's probably going to walk quickly in the opposite direction.

Aunt Esther's annual grab at your left hand and subsequent clucking over your naked ring finger is annoying, but you write it off because she's senile and will die soon. When your cousin Myrna gasses on about her impending nuptials over eggnog, you actually feel a little sorry for her because you see the way her betrothed keeps eyeing her sister.

But when your baby sister flashes the rock that her professor-turned-paramour put under the tree, you succumb to a little condition called "The Ring Tizzy."

"The Ring Tizzy" is what happens when you just can't take another snide comment, pitying look, or "helpful" suggestion. You're single, after all -- not recently diagnosed with some fatal, flesh-eating disease.

But that's how it can feel sometimes, and instead of cracking-wise in reply, you give in and decide that you are going to shut all of them up once and for all because you, too, are getting married. Whether he likes it or not. After all, you guys have been dating for a couple years, months, weeks, or days -- how long does he think he's going to keep milking that cow for free?

Here's exactly the wrong way to go about extracting a proposal from your man.

1. The cutesy ooopsy method: You leave magazines scattered around. Oddly enough, each one open to giant, full-page ads for diamond rings. You hum "Every kiss belongs to Kay" and every other jewelry store jingle you can think of.

While out walking with your guy, you always seem to need to stop and tie your shoes or adjust your scarf just as you pass a jewelry store. You work jewel-related metaphors into every possible conversation: "She's as dull as a half-price CZ," or "I wish my hair were PLATINUM." You aren't convincing him to marry you --you're showing him that you think he's a moron.

2. The business agreement: "Look, neither of us are getting any younger, let's just get married," you briskly inform him while whipping out a sensible spreadsheet that proves exactly how marriage will be beneficial to both parties. This approach is about as romantic as a hairball, and if he thought he was worried about being celibate once he walked down the aisle, this is just the tool to convince him of that.

3. The angry passive-aggressive "hint": "What do you want for Hanukkah," he asks sweetly. "I want to die alone, in my parents' basement, covered in cat hair," you hiss in reply, as your head spins like a top and pea soup spews from your mouth. You charmer -- who wouldn't wanna marry you?

4. The angry aggressive-aggressive approach: When most guys consider marriage, they aren't envisioning a romantic ceremony and a reception filled with their nearest and dearest. They're thinking that you're the last person they're ever going to hook up with, and if their friends' marriages are any indicator, he's not even going to be getting much of that.

If you need to shriek and demand a proposal from a guy, he's probably going to walk quickly in the opposite direction. Even if he gives in, you might have a fun wedding, but you're not going to have much of a marriage. Sure, he might have sprung for the ring, but he's never going to forget that he was hectored into doing something he wasn't ready to do.

Much better to show Aunt Sophie your other finger, congratulate Cousin Myrna on landing such a stylish groom, give your sister a congratulatory hug, and count yourself lucky that you're not going to see your family for another year.