Are you rude? Maybe you should think again

(OPRAH.com) -- Fed up with the rude behavior you experience day in and day out? Is it aggressive driving, co-workers who don't wash their hands or smokers who use the sidewalk as their personal ashtrays? 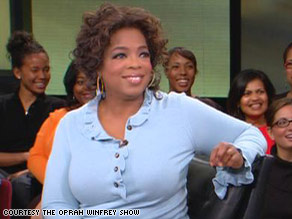 Oprah says she can't stand people who are rude to service workers.

What about the sales clerks who ignore you -- then act like they own the store when you finally get their attention?

It's time for a return to civility! In "O, The Oprah Magazine," Oprah asked Jerry Seinfeld about his biggest pet peeve. Turns out, it's a lack of civility.

"Nobody's ever said that as an answer in all the years I've asked that question," Oprah says. Jerry's top three? Cutting people off on the road, BlackBerry or cell phone abuse and interrupting while someone is talking.

Oprah agrees with Jerry about offensive cell phone behavior -- and she has a few rude behaviors to add to the list. "Mine are people who are chewing gum with their mouth open. I don't want to see it," Oprah says. "I also can't stand it when people are rude to service workers because I think you show who you are by how you treat people who are serving you." Oprah.com: How rude are you really? Take this quiz

Audience member Nancy says she got a rude awakening in the last place any woman would expect -- at the gynecologist. "I was at my gynecologist's office and I put my legs in the stirrups, totally exposed," she says. "His cell phone went off and he answered it. It was not an urgent conversation, and it went on for seven to 10 minutes."

Nancy says she was so shocked she couldn't even say anything! "I never went back," she says.

As a Transportation Security Administration (TSA) agent, audience member Stephanie sees about 2 million people every day -- and plenty of bad behavior. "We call them 'special,'" she says.

Stephanie says rude travelers take their anger out on TSA agents, sometimes even calling them names, simply because they're there. One time, Stephanie says a customer hurled a bottle of cologne at her head. "This is after I told him that he couldn't take the bottle of cologne onto the plane because it was after the liquids restriction," she says. "He was just so incensed that it surprised me."

One tip Stephanie has for travelers looking to get to their gates faster is to put away those cell phones! "[When] you're waiting to get a person's I.D. and check their tickets and they walk up to you on the phone and they're ignoring you like you don't even exist," she says, "you don't want to be rude and interrupt their conversation, but they're also being inconsiderate for the other passengers in line."

Eighty percent of Americans think rudeness is a serious national problem, but 99 percent of the same people say that they themselves are not rude.

Oprah takes the quiz with members of the audience. The first question is: Are you chronically late? Oprah has to admit, "My answer would be sorta kinda," she says.

Oprah says her friend and trainer Bob Greene once taught her an important lesson about being on time. "When I first started working out with him, I was late. I was chronically late," she says. "And I was late one day, and he said, 'If this ever happens again, I will never work out with you, because my time means as much to me as yours means to you. So you either get here on time or find yourself another trainer.' And I went, 'Okay.'"

How many times have you run in and out of the gas station? Ever think about what it's like to be on the other side? Oprah.com: How to be the best customer you can be

Shannon is the mother of three and works as a clerk at a gas station. "I think people are rude when they're having a bad day, and they don't expect to ever have to see you again, so they say what they want," she says. "I used to be a rude customer. I would talk on the cell phone while someone was trying to help me. I don't do that anymore because now I'm on the other side of the counter."

She's nicknamed some of her rudest customers "the tossers." "What they do is instead of handing me their cash, they toss it at me," she says. "I've had people toss it so hard it's actually flown off my side of the counter."

There are also "the messers." "They come, they get what they want, they leave their mess, and then I have to clean it up," she says. "I wonder if they do that at home."

But by far, Shannon says the rudest thing that's happened to her at work was getting cussed out by a woman whose credit card was declined. "I ended up having to flag down a police officer to have her escorted out," she says. "Sometimes I feel like a human punching bag because customers take things out on me that are not my fault."

According to Dr. P.M. Forni, everyone can improve the quality of their relationships and lives by choosing to be more considerate, courteous and polite.

For the past decade, Dr. Forni -- a professor at Johns Hopkins University and author of "Choosing Civility: The 25 Rules of Considerate Conduct" and "The Civility Solution: What to Do When People Are Rude" -- has been on a mission to promote gracious behavior.

"The quality of our lives is about treating each other well in every situation. We are all the trustees of one another's happiness and well-being in life," he says.

Dr. Forni says modern society is structured in a way that actually amplifies and encourages incivility. "We are stressed, we are fatigued and we are in an anonymous environment. Stress and anonymity are two very, very common causes of rudeness," he says. "Especially when they are together, like in traffic."

In "Choosing Civility," Dr. Forni uses a quote from motivational speaker Peggy Tabor Millin -- "We never touch people so lightly that we do not leave a trace" -- to illustrate the idea of "respectful persons."

"The principle of respectful persons is the principle upon which all ethical systems have been based from the beginning of humanity, since certainly the last 2,000 years," he says. "[The principle] says that we ought to treat others as ends in themselves rather than as beings for the satisfaction of our own immediate needs and desires."

Dr. Forni says choosing to act in a civil manner has proven more beneficial than self-satisfaction. "I'm not a physician, but any doctor will say that when we are involved in a rude encounter, there are hormones -- like catecholamines, for instance, cortisol -- that are cascading into our system and they are making our immune system weaker," he says. "If you have a boss that you perceive to be unfair, you're much more likely to have cardiovascular disease."

The bottom line? Going through life rude and angry can make you sick.

If you want to see rudeness in action, one of the best places to look is in the restaurants of America. Kara says she knows one of those rude customers personally -- her sister Jeni is one of them!

"Anywhere we go out to eat, she refuses to sit at tables and she has to sit at a booth. And if they're really busy and she has to wait to sit at a booth, then she complains about having to wait to sit at the booth," Kara says. "If her water glass gets empty ... and they're not immediately there to refill her water, she gets really upset or won't leave a tip because they're not doing their job. And she orders iced tea a lot and she puts sweetener in her tea, and so it gets a certain amount of sweetener. And lots of times the waitress or waiter will come and top off the glass and she gets upset because now her sweetener-to-tea ratio is messed."

Jeni says she doesn't intend to be mean but isn't afraid to tell waiters when something is wrong. "Most of the time, I find something that's not correct," she says.

For nine years, Steven Dublanica was a waiter who experienced his share of difficult customers like Jeni. He recounts those experiences and more in the hugely popular blog Waiter Rant, which he's turned into the best-selling book "Waiter Rant: Thanks for the Tip -- Confessions of a Cynical Waiter."

Steven says customers certainly have a right to expect good service at a restaurant, but it's not their right to be rude. "When you get to the point where you're picking on everything, that becomes a control issue because you're really trying to control everything around you," he says. "And it's not going to work."

Steven says he thinks some people feel license to be rude to waiters because of the nature of the interaction. "It's a servant job. You know, we're bringing food to a table and we're getting tips in return. That's fine. I don't have a problem with that," he says. "But when people start thinking that we're not human, that we're slaves, that we don't have feelings? Sometimes when people treat us that way it hurts."

When you hurt your waiter's feelings, Steven says you might find yourself on the receiving end of a bit of revenge ... but it may not be quite as bad as you think. "I think the one everyone is scared of is spitting in the food. I think very few waiters do that in actuality," Steven says. "I had a rule when I was waiting. My rule was, 'If I couldn't give it to my mother, I didn't give it to my customer.'"

Steven says there are three things you can do to stay on your waiter's good side.

"I would be coming up to a table and saying, 'Here are the specials we have today.' And the phone would ring and they'd go, 'Wait." And then I would [say], 'Can I come back in a minute?' 'Wait,'" he says. "That's very rude behavior."

2. Don't demand a different table on a busy night.

"On a busy night, the hostess has set up the seating plan in a way that it's like the logistics for the Normandy invasion," he says. "If you change one table, everything gets thrown off."

Steven says everyone -- even celebrities -- has to understand what happens in a restaurant during weekends.

Waiters are paid wages well below the minimum wage -- as little as $2.15 an hour in some states -- with the expectation that they will earn the majority of their income through tips. In addition, some restaurants require waiters to pay around 20 to 30 percent of their tips to food runners, hostesses and bartenders.

"If you don't tip, then that person doesn't get paid," Steven says. "Literally."

All About Etiquette and Manners • Oprah Winfrey