(LifeWire) -- When April Kling locked eyes with a handsome stranger on her flight out of Chicago last Christmas, her heart skipped a beat. So she did what any hip 21st-century single would do: She posted an ad on Craigslist.org's "missed connections" bulletin board when she got home. 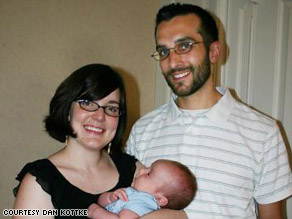 A "missed connection" ad led to the marriage of Dan and Erin Kottke who welcomed son Linus two years later.

"He replied within two hours," says Kling, a 29-year-old sales associate and musician from Seattle. "We e-mailed back and forth and realized we had a lot of mutual friends. I thought, 'Wow, this is meant to be.'"

Kling and her missed-connection match went out a few times, but then he bowed out, citing relationship butterflies. Three weeks later, however, a mutual friend told Kling the guy was seeing someone else. But he apparently was still smitten with the story of how he and Kling met.

"I was at a wedding and this girl came up to me and says, 'Are you that April who dated so-and-so last winter? I just love your story -- it's so romantic,'" says Kling. "For me, that's the kind of story you tell if you're still together."

Yearning to be 'missed'

Craigslist, Kizmeet.com, ISawYou.com, SubwayCrush.com -- these missed-opportunity matchmakers have become a staple of online modern love. They've also become a way for some singles to fantasize about the people they'd like to meet and those they hope will want to meet them.

"I love reading those missed-connections ads. Everyone does," says Adrienne Meraz, a 22-year-old gallery assistant from New York City. "And I've always had this hope in the back of my mind that someone would 'miss' me."

Meraz's wish came true in February after a chance encounter with a handsome graphic designer named Jeff at the grocery store, when they both reached for the same carton of orange juice. At home a few hours later, Meraz, an avid reader of Craigslist's missed connections, surfed over to the site and got the surprise of her life: "Beautiful girl in the sambas at Trader Joe's - m4w - 23 (Union Square)."

"When I saw Jeff's ad, I started screaming, 'I'm the brunette in the (Adidas) Sambas!'" Meraz says. The two have been dating ever since.

Mary Robertson, a documentary filmmaker in New York City, isn't surprised by the appeal of the missed connection. She's been working on a film about the phenomenon for 10 months.

"What inspires me about these ads is the density of the narrative," says Robertson, 30, who's read and responded to hundreds of Craigslist postings since beginning work on the film. "The longing, the romance -- all in this small space. They're like haikus."

Some of the stories Robertson has collected are heart-wrenching -- like the Milwaukee man who spent five hours talking with a woman in a New York bar, realized she was the "love of his life," then left without getting her number. Others, like the woman whose online flirt turned out to be married, are cynical reminders of how elusive true connections can be.

Most ads come from commuters afraid to talk to someone on the subway out of shyness, says Robertson. Other chance encounters occur at big-box stores like Target.

"There's one elevator in the Target on Atlantic Avenue in Brooklyn that seems to be a real hot spot for romance," she says. "If I were single, I'd ride that elevator up and down."

The appeal of missed-connection Web sites may indicate a shift in how people approach the search for love.

One woman Robertson interviewed told her of a flirtatious encounter with a guy at a pizza parlor. Rather than give the guy her number, Robertson says, "she said to herself, 'I'll just find him later on the Internet.' Five years or even two years ago, you wouldn't have thought you could find a stranger on the Internet. But that possibility exists now."

That's not necessarily a good thing, says Bonnie Jacobson, director of the New York Institute for Psychological Change and author of "The Shy Single: A Bold Guide to Dating for the Less-Than-Bold Dater."

"We have so much technology, all these ways of communicating that aren't face to face, it's intensified our fear of direct communication," she says. "It's always scary to say hello to a stranger, but going to the Internet just keeps the hesitation going."

But missed connections aren't just about being too shy to approach a potential love interest or reaching for the unattainable out of fear of commitment. Sometimes, they're simply about losing the object of your attraction in a crowd.

Dan Kottke, a 31-year-old architect from Minneapolis, says he was disappointed when he couldn't find Erin, the "cool girl with the magnetic personality" he'd chatted with at a concert on September 4, 2006. But he was delighted when he saw her Craigslist posting the next day.

"A lot of those ads seem to be from guys and girls who can't work up the courage to ask the person out," he says. "But in the case with Erin, it was a true missed connection."

Kottke and Erin, a 26-year-old marketing manager, went on a date three weeks after she posted the ad. Their story has a true -- and traditional -- happy ending.

"It's really unbelievable to think how one little item like an Internet posting has changed my life," says Kottke. "But a couple of years later, I'm happily married and have a great son. I really do owe a lot to Craigslist."

LifeWire provides original and syndicated lifestyle content to Web publishers. Diane Mapes is the author of "How to Date in a Post-Dating World" and writes a column, Single Shot, for the Seattle Post-Intelligencer.