The mystery of freaky phobias

(LifeWire) -- Carol Ann Carnese never considered herself an anxious person. Except when it came to wet wood. 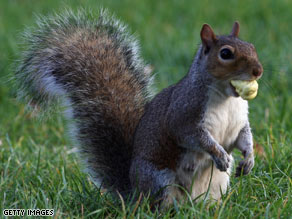 Does this small creature terrify you? You might have sciurophobia - the fear of squirrels.

"If I saw someone lick a wooden spoon, I had to turn away," says the 41-year-old massage therapist from Portland, Oregon.

"I'd break out into a sweat ... and I'd just get sick to my stomach. I could not even look at someone with a toothpick in their mouth."

It wasn't just looking at wet wood that freaked her out. It was touching it, too.

"I could not eat Popsicles to the end," Carnese explains. "As soon as I got close to the end, I would give it to my kids. I would not even own wooden utensils because I could not wash them. Not even in the dishwasher because they would still be damp when they came out."

Until Carnese was treated by a professional -- a process that involved gradual exposure to wet wood to "reprogram" the way she thought about it -- physical contact with wet trees, fences and the deck surrounding her hot tub was out of the question. (Instead, she would wear slippers to walk back to the house post-soak.)

See some examples of unusual phobias »

Carnese's fear of seemingly innocuous objects and situations is no anomaly. Phobias are the No. 1 psychiatric illness in women of any age and the No. 2 in men older than 25, according to the American Psychiatric Association.

A "specific" phobia, or an "excessive and unreasonable fear of a specific object, place or situation," afflicts about 19 million people in the U.S., according to the Anxiety Disorders Association of America. Fears can range from the relatively commonplace fear of closed spaces, or claustrophobia, to the more unusual, such as a fear of dolls or children, known as pediophobia.

"Phobias can affect anyone," says Elizabeth Lombardo, a clinical psychologist in Wexford, Pennsylvania. "So many highly functioning people have them. It doesn't matter your socioeconomic status, your intelligence level."

Even realizing that a doll or a wet popsicle stick is harmless doesn't help sufferers overcome their phobias.

"Knowing that it isn't rational or it doesn't make sense doesn't help them get over their fear," Lombardo explains. "Your mind says it's not rational, but your body says, 'Yeah, but I'm scared.'"

Just ask Bryan Schultz, 36, who is afraid of "any small, furry animal that gnaws on things."

"Rabbits and squirrels are especially terrifying for me, but even non-rodentia, like ferrets, freak me out," says the copywriter from State Center, Iowa. "I work right next to a park with many trees, and I have to honk the car horn to scare any critters away before I open the door on many mornings."

"I recognize rationally that it's funny," says Schultz, who doesn't consider himself a "fearful" person. But that doesn't stop his heart from doing backflips when he encounters a squirrel.

Rather than seek professional help, which often involves confronting the feared object or situation directly, phobics may try to manage their anxiety through avoidance.

Instead of walking on the sidewalk, he quickly moves to the street if he spots a squirrel in his path. When a carpool buddy intentionally parked under a tree filled with squirrels as a prank, "I had to honk the horn and sit in the car for seven minutes" after his colleague had gone into the office, Schultz says.

Peyton Pinkerton, 37, guitarist with the band Pernice Brothers, battles a similar impulse to flee the object of his personal phobia: clowns.

"I was yelled at by a birthday party clown when I was about 4 years old and have been absolutely terrified of them ever since," says the resident of Northampton, Massachusetts.

"If I'm surprised by seeing a clown, it's like snakes or rats. My fight-or-flight response kicks in," Pinkerton says. "I have run out of malls, fairgrounds, etcetera, on repeated occasions."

Avoidance and other quick fixes are no substitute for treating the phobia, Lombardo says.

"That's what we call a Band-Aid reaction," she says. "It perpetuates your fear."

The good news, Lombardo says, is that phobias can be cured. If you're suffering from one, she suggests the following:

• Go easy on yourself. "People are so embarrassed by this," Lombardo says. "They think there's something wrong with them." But, she says, not beating yourself up is key.

• Remember to breathe. "When people are confronted with their fear, their distress level increases," Lombardo says. "Deep breathing is always a good thing."

• Face the music. Facing the feared object head-on is important. "You're retraining your body in addition to your mind. It's like putting your feet in a hot bathtub or cold pool: You wait a little bit, and your body gets used to it," Lombardo says.

LifeWire provides original and syndicated content to web publishers. Michelle Goodman is a freelance writer and author of "My So-Called Freelance Life: How to Survive and Thrive as a Creative Professional for Hire."

All About Mental Health