Trump down on economy, up on McCain

(CNN) -- Central banks around the world are pumping billions of dollars into money markets in a coordinated bid to calm global financial upheaval. 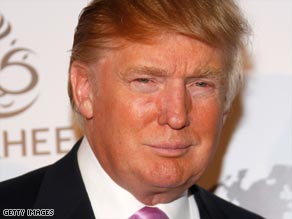 Real Estate magnate Donald Trump appeared on "Larry King Live" Wednesday to discuss how the economy got to this point, how it may provide opportunities for some families and which candidate is best equipped to handle the crisis.

Larry King: Who do we blame for this, Donald?

Donald Trump: Well, there's a lot of greed on Wall Street. And a lot of people are making crazy deals and you can blame everybody, even the regular consumer that went out and bought a house and got a mortgage that was ridiculous. You know, we call them exploding mortgages. But you can really blame a lot of people. And I guess you can maybe just blame the times.

King: Are you concerned about Goldman Sachs and Morgan Stanley?

Trump: Well, it would seem to be a great concern. John Mack of Morgan Stanley is a great, great man. He's a great friend of mine, a great businessman and you see a company like that is under trouble, I know how good a man he is.

Larry King Live
See the latest on how the candidates would tackle the economic crisis.
Tonight, 9pm ET

I know what a good job he does, but you look at what's happening to Morgan Stanley. It's very, very frightening. I had a friend that put a tremendous amount of money about a year ago into AIG. Smart guy, well-known, you know him very well, very rich. He said, Donald, I want security. He got wiped out, got totally wiped out.

Now, not all of his money, but he lost everything he put into AIG. I called him, Larry, I gave him a very hard time, I really did laugh. He wasn't laughing, however.

King: You enjoy that, Trump.

Trump: I do love it, I actually do. I can only love it when it's a great friend, Larry.

King: I know, this is something you're not. So try to put yourself in their shoes, the average American family, average guy. ...

Trump: Well, it's both a very tough time and a great opportunity. There are great opportunities right now for people when you say average family. It's an unbelievable time to buy a house and especially if a bank happens to own it because they've put the money in so it's not a question of getting financing.

The money is already there. Go out and make a deal. The banks want to unload their stock. They have thousands and millions of houses. Go out, see what they have, get yourself a great house, they will give you financing.

King: Obama or McCain, who would handle this better?

Trump: Well, I know John McCain, and John McCain's a great guy, a tremendous guy. I've known him for a long time. And I'm with him, and I'm with him based on the fact that I have great knowledge of John McCain. Also, this is not the right time for tax increases and Obama wants to increase your taxes drastically. So this is not ...

King: In all fairness, he says he doesn't.

Trump: This is not the right time.

King: Obama said 95 percent would be reduced under his plan.

King: Have you formally endorsed the ticket?

Trump: No, but I'm endorsing McCain. I am basically very strongly -- you have to understand, I've known him, I like him, I respect him.

King: So you're endorsing him?

Trump: He's a smart guy and I think he's going to be a great president.

King: So you're endorsing him?

Trump: Sure, I'll endorse him on your show, why not?

King: You just endorsed him.

Trump: I endorse him.