Woman endures all in trying to conceive

(OPRAH.com) -- It was the day before Christmas, and I was reading "Newsweek's" cover story on diet and fertility when I stood up, ripped the roof off a gingerbread house, and ate it, like Godzilla. 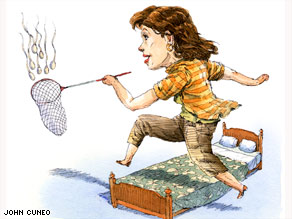 A doctor told the author to visualize her husband's face on a cartoon sperm, with arms welcoming her egg.

This was not something the cover story recommended, by the way.

It was a reaction to something the cover story recommended, namely that you shouldn't eat a lot of red meat if you're trying to get pregnant.

I was trying to get pregnant. My husband and I had been trying for two and a half years. I also had a steak on the grill that was going to be my lunch before I decided to have the gingerbread house instead.

"Trying" is a good word for this process. At first, trying just meant sex without birth control, but when you marry at 40, trying quickly becomes more trying, and eventually we had the requisite army of experts, most of whom insurance doesn't cover, but of course, you can't put a price on a baby.

You can put a price on not having a baby. That's running us close to $45,000 in credit card debt.

So by the time I was reading that "Newsweek" article, I'd done it all... drugs, suppositories, IUI, IVF, that test with the blue dye, acupuncture, stinky teas, hormone injections.

Once, we were driving to see a doctor in Beverly Hills, and my husband asked what kind of doctor he was, and I said, "I don't know, but someone said to see him, so we're seeing him!"

It was that doctor, incidentally, who told me to visualize my husband's face on a cartoon sperm, with arms welcoming my egg to him. We decided the guy was a quack, so I only saw him twice a week for about four months.

The thing is, when you're racing your biological clock, people can tell you pretty much anything and you'll do it. I still worry I need to track down some saint named Amachi so I can bring her red bananas.

Recently, a friend said something about standing on your head. He wasn't sure if you were supposed to do it before sex, during, or just in general, but this worked for two women he knew, so I guess I have to stand on my head now. I'll probably visualize my husband's face on a cartoon sperm while I'm at it -- not because I'm onboard with that. It's just a hard image to shake.

So it was kind of revolutionary that for the holidays we went to Jackson Hole and we didn't even take ovulation sticks, which might not seem crazy to the average person, but when you're in the middle of this madness, not knowing when you're ovulating is like not knowing where your cell phone is.

In the weeks after that trip, I felt good. Well, bad-good. I mean, my breasts were tender, I felt a little nauseous, I was dead tired... I had all the bad-good signs of pregnancy, which I recognized because I'd been pregnant before.

We actually got pregnant on our wedding night, and for a moment we were "those people" (you know, people who got pregnant right away, maybe even accidentally, which now seems as likely to me as accidentally finding Osama bin Laden), but back then I didn't know any better, so we were "those people" until three months later, when we found out the baby's head was too large, and there was fluid where there shouldn't be, and there was a malformed heart, and the baby probably wouldn't make it to term, and, as the doctor said, we should seriously consider termination unless we were deeply religious.

That news was hard to take, but even harder because I felt guilty. The truth is, at that time, I didn't want to be pregnant.

We'd just gotten married. I still wasn't sure it was going to last. Oprah.com: 20 questions to ask before you get married

I also thought a little time as a couple would be nice since it took us 40 years to find each other. But my husband was eager to start a family, so the morning after he proposed, we were walking on the beach and I threw my birth control pills into the ocean in a dramatic display of love and good faith, and it made him so happy that I had to resist the urge to run screaming into the surf to recover them.

We were in South Africa on a safari, and they had warned us to keep the sliding doors to our bungalow locked because of the monkeys, but I thought they meant when we were out. And I was in, curled up in bed, when all of a sudden I heard the door open.

Then I heard this thump thump thump, and I got up and looked into the living room, and there were seven monkeys throwing food around, and they froze as if I had just walked in on a teenager's party. And the funny thing, looking back, was that this was my fear. This is what I thought it would be like to have children. This is why I never felt ready.

Cut to the day of the "termination." We were already distraught, and then on the way to the appointment, we got pulled over by the police because my husband didn't see a woman walk into the crosswalk. I did see the woman, but she was on the other side of the street, plus I was trying not to say anything, as my husband had taken to charging me five dollars every time I told him how to drive, so the policeman pulled us over and said, "Are you trying to kill someone?!"

And I was thinking, "Yes, actually. That's exactly what we're trying to do, and if you would let us go, we could get on with it."

I remember, the rest of the way to the clinic, I was pissed at my husband for not seeing the woman, and he was pissed at the policeman for being such a dick, and the truth was, we were both just pissed at the universe for giving us this gift that we had to return.

But now, thanks to Jackson Hole, we were getting a second chance. And this time, when I took the pregnancy test, I was praying for a positive result rather than dreading it. But it was negative.

That was in the morning, and then a few hours later I was reading "Newsweek" and the next thing I knew, I was eating a gingerbread house.

The gingerbread itself was pretty hard. I think it was made in Korea and not meant for eating. It came from a kit, one of six kits my friend purchased for a gingerbread house decorating party, so I had decorated alongside five women who were all mothers, some several times over, one with her newborn son in tow, and I know it's not a competition, but my gingerbread house was the best.

I had decorated the roof with white icing, sour balls, red Twizzlers, and green gumdrops, none of which tasted very good. And what I really wanted was the door, which was made of Hershey's Special Dark chocolate.

Maybe you're wondering why I didn't just pull the door off. I tried that, but the icing is like glue, and the door was stuck to the front of the house, and the whole house was stuck to a foil-covered piece of cardboard, so you had to eat the roof before you could eat the door.

Well, you didn't have to eat the roof. You could, I suppose, just rip it off. But I was upset for all the reasons I've mentioned, and red meat was the final straw.

See, not only did I have a steak on the grill, I'd had a steak on the grill almost every day for the past year. I'd gone from my highest weight ever to my lowest ever on a doctor-supervised "eating plan," which was really a "not eating plan." I got only two meals a day, three ounces of protein per meal, so I decided my protein would be filet mignon whenever possible.

My plan was to lose weight until I got pregnant (it's supposedly healthier to get pregnant at a lower weight), but since it was taking so long to get pregnant, I ate a lot of red meat, and I lost a lot of weight. Fifty pounds, to be exact. Oprah.com: 13 pregnancy superfoods

For the first time ever, I felt like someone who belonged in L.A. I bought a pair of skinny jeans and strutted my significantly smaller stuff down Robertson Boulevard. I felt, in a word, fabulous. So fabulous, in fact, it took me a while to notice that I wasn't getting my period. And not for the reason I'd been hoping.

So although I loved my skinny jeans, I didn't love them enough to give up having a baby, and I still don't think it's fair that that might be the price I have to pay for wearing them. (I thought $178 was expensive!) It's like I made a deal with the skinny devil.

I did finally get my period back once I went off my not eating plan, which I did with the gusto of someone who's been told to gain weight for a role. And also thanks to Dr. Dao at Tao of Wellness (a center for Chinese medicine), who suggested electroacupuncture to jump-start my ovaries, which, I'm not kidding, involved tiny little spark plugs that attached to needles in my stomach and caused a zap zap zap sensation.

There was a control that changed the speed and intensity of the zap zap zap, and usually Dr. Dao would set the dial, but once he left me alone with it and let me control it, and that's when I wondered if maybe I was in some sort of cruel medical experiment where they try to figure out how far a woman will go to have a baby. Will she stand on her head? Lose 50 pounds? Blow up her ovaries? Keep turning it up until ... poof!

Because, really, how much disappointment can one woman take? How many times can you be hopeful when odds are you're going to get sucker punched by your period or a negative pregnancy test or something else you never saw coming? And yet you can't stress about that, because stress is the worst thing for fertility. Oprah.com: Across the world to get pregnant

I know, by the way, that once you have a baby, this all gets put behind you. I know the end of this movie. I don't know where or when or how. We've discussed donor eggs, but I don't really like guests in my house, so in my womb -- I don't know.

Which you have to do, I guess. As in any worthwhile endeavor, you have to go through the hard, unsavory part before you get to the good stuff.

You have to eat the roof before you can eat the door.

By Cindy Chupack from "O, The Oprah Magazine," September 2008

Cindy Chupack is the author of "The Between Boyfriends Book" (St. Martin's Griffin).