Moving in together and avoiding a falling out

(LifeWire) -- After weathering a troublesome roommate situation for a year, Dave Sotelo, 26, was ready to move out. His girlfriend, Ngoc Nguyen, had the perfect solution: moving in together. 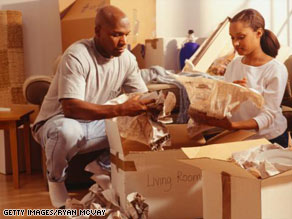 It's better to find a new place to live than to move into one person's established home, says expert.

"Conveniently, an apartment in my four-unit building became available at the very same time," says Nguyen, 26.

There are obvious advantages to cohabitation, both emotional (living with the person you love) and financial (sharing expenses like rent).

The drawbacks are just as glaring, like adjusting to annoying personal habits and accommodating your loved one's passion for knickknacks that make your cringe.

One thing's for certain, experts say -- the more you discuss before you move in together, the more likely your relationship will succeed. Sotelo's and Nguyen's certainly has improved in the year and half they've lived together.

The Albany, California, couple is in good company: According to The State of Our Unions 2007, a report by the National Marriage Project at New Jersey's Rutgers University, "over half of all first marriages are now preceded by living together, compared to virtually none 50 years ago."

Get on the same page

But living together doesn't guarantee success. In fact, about half of all couples that move in together end up separating within five years, according to the Centers for Disease Control. There's no way to guarantee your relationship won't become another statistical failure, of course. But there are steps you can take to increase the chances for success.

Before moving in together, discuss the ultimate purpose and how this might affect your relationship -- is it a matter of convenience to provide shelter or financial support, or is it the next step toward marriage?

"Are they going to truly commit to each other's well being on every level? If not, forget it," says Lee Richey, a marriage and family therapist based in Fishers, Indiana.

Have a plan to merge possessions

Coordinate a plan of attack: Assess space constraints, sort out what you want and what you need, and get rid of duplicate items. Natural selection should take place: Keep whatever is cleaner, nicer and newer.

If you're a pack rat like Nguyen or Sotelo, negotiate space for what's most important to each of you. "He doesn't really like to let go of boxed-up old things, and I have more clothes than I could ever hope to wear," says Nguyen. "It's a slightly tenuous cease-fire at the moment. We just try our best to keep the open areas clean and clutter-free."

The solution, Richey says: "Discuss a limit on sentimental items before hand, given there will probably be limited space."

He advises starting fresh in a brand-new place as opposed to moving into one person's established space.

Each of you will have your own quirks, so try to respect that. "I get sensitive over an unclean bathroom shower; he gets touchy over a greasy stovetop," says Nguyen. "We claim our territory ever so subtly."

In addition to being mindful of common space, carve out individual space so you can have some time alone if you wish.

Be meticulous about money

It's not romantic, but take care when buying big-ticket items with your significant other, advises Frederick Hertz, an Oakland, California-based attorney and co-author of "Living Together: A Legal Guide for Unmarried Couples."

"If you're doing any significant purchase or credit where you can't afford to just walk away from it if your lover turns out to be a total sociopath, then have a written agreement," Hertz says.

• If you take out a credit card in your name, use it only for your own expenses.

• If you buy a house together, make sure the title reflects your share of the financial contribution.

• If you decide to open a joint bank account, understand that each person has full access to that money.

• If one partner is financially supporting the other -- helping pay for graduate school, for instance -- there should be "no expectation of payback, no strings attached," says marriage therapist Richey. "If you don't feel completely comfortable supporting your loved one, then don't start."

Even if a couple takes all of these steps, there's still a change that one day they'll part ways. If that happens, cohabitating couples have some of the legal protections of married couples if they meet their state's definition of common-law spouses or draft written agreements before the split, Hertz says.

An agreement doesn't have to be drafted by a lawyer to be recognized by a court. In about 40 states, an unmarried cohabitant can make a claim based on an oral, written or implied agreement.

The courts so far have extended the same rights and rules to both heterosexual and homosexual couples, Hertz says.

Every state has different laws, so if moving in doesn't work out, you'll want to speak with a local lawyer.