Don't say THIS to new date

(The Frisky) -- Lord knows that there are a lot of wacky people running out there, and for some annoying reason women get slammed (unfairly, if you ask me) with the crazy card more often than men. 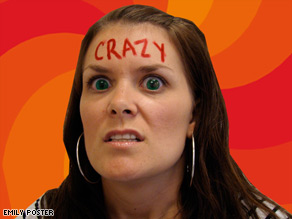 However, sometimes (not often, but sometimes) maybe the name-callers have a point. Some of us can be kind of kooky. I'm not talking about whimsically cute eccentricities; I'm speaking of full-on lunatic behavior.

Maybe you've been labeled a little odd or a tad touched. No shame in that -- hey, let she without issues cast the first stone -- but most likely you don't want your sanity shortcomings to be the first impression you make upon a new date. For this reason, you should, at all costs, avoid going down the following roads for at least the first three dates:

• "My therapist says. . ." Unless he's your full-on boyfriend, beginning any sentence with those three words will cause a man to make a mad dash for the hills. Yes, even if he's in therapy himself. At worst, he'll think you're crazy; at best, he'll think you're the type of gal who's going to require a lot of "talks." Neither impression bodes well for your future relationship.

• Any mention of psychotherapeutic medications. Know what the #1 side effect of most mental health medications is? Yep, you guessed it -- loss o' libido. While it's a well-known myth that nutty broads are phenomenal, once they're medicated that tends to fall by the wayside. So they get all of the crazy, with none of the coitus.

• Baby talk. Generally employed by adult women who insist on wearing pigtails, Hello Kitty backpacks and age-inappropriate clothing such as rompers well past their wear-by date, the baby talker sends a clear message: She's not looking for a partner, she's looking for a caretaker. Don't pull a big frowny face because I called you out; just get over it and grow up.

• The Nibbler. While no one will deny that most men appreciate a sleek physique, nobody wants to eat dinner with the girl who only picks at a sad salad with all of the good stuff "on the side." It's been said (okay, by me), that a big appetite for food usually goes hand in hand with a voracious appetite for other things, so go ahead and order that steak. Besides, eating disorders are so 1990s.

• Savior from another planet. Common knowledge posits that one should not discuss religion or politics on the first few dates. If your belief system requires special outfits, excessive tithing or a faith in space-creature deities, this goes quadruple for you.

• Recovery Speak. Unless you've met him in "the rooms," steer clear of all mentions of "one day at a time" (unless it's the TV show), higher powers, and "steps". While it's commendable you're working on your issues, he doesn't need to know you used to single-handedly keep Parrot Bay's stock in the green.

Now I'm not suggesting you hide your inimitable spunk under a dull blanket of feigned lucidity, I'm just saying that you might want to wait until you're sure he really digs you before showing him the collection of restraining orders you've managed to rack up. When you finally do show him just be sure to explain that those guys never understood you like he does anyway. . . .

Judy McGuire is the author of How Not to Date (Sasquatch Books), and for the past eight years, has been writing a funny sex and love advice column called "Dategirl" for the Seattle Weekly.