Some concerns of 30-something women

(OPRAH.com) -- What's it like to be a 30-something woman in America today? From religious choices to parental pressures, a successful single woman in Washington, D.C. and a devoted mother of four open up. 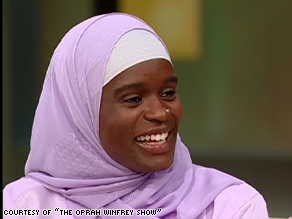 American-born Muslim Mubaraka tries to be open with people so she can help them understand her religion.

One issue that plagues an average of 6.3 million women in America is being single.

Julie, a Chicago pediatrician, struggles with the stigma of being alone in her 30s. "I've tried JDate, a Jewish Internet dating service, Match.com, setups by my friends," Julie says. "I recently adopted a dog, hoping to meet someone out in the dog park."

Like many single women in America, Julie is no stranger to the dating scene -- but finding dates isn't always the problem. "It's not that there are no men to date. It's that I'm not meeting anyone that I'm attracted to. Nobody that I think is quality and worthy of me and what I have to offer and what I want to do."

Now Julie thinks marriage may not even be what she wants. Instead of waiting around for a husband, she's considering having a child on her own. "I'm probably going to investigate an anonymous donor and do it artificially ... I want it to be my own biological child," she says.

DeChane, a successful attorney in Washington, D.C., also struggles with the 30-something singles scene. Her fear is that men are intimidated by her.

"None of my female friends have ever said I'm intimidating," she says. "Having an education, a house, a job does not make me intimidating. It just makes me an adult living an adult life."

She finds it ironic that her achievements may turn men off. "I would think they would find it more unusual if I walked into the picture not having anything. But I think after 35 years of living, working and being driven, I should have something to show for it."

DeChane also thinks men make assumptions about single women in their 30s. "I think they assume that if you aren't married, you want to get married," she says.

"Instead of meeting you and approaching you in a manner that's very basic -- 'I want to get to know you, who you are, what your likes and dislikes are' -- I think they walk in the door expecting you to try to strong-arm them into getting married, and it scares them away."

For Amy, a divorced mom, dating in her 30s has been stressful. "I wish there was a manual for dating, because I have been out of the game for so long," she says. "Growing up, I always wanted to be a wife and a mom and didn't expect that I would find myself single again."

With four children at home, Amy faces a unique set of dating issues. "I run a criminal background check on every guy I go out with," she says. "I have to be very careful about who I invite into our lives."

Amy also realizes that a woman with kids isn't what every guy is looking for. "I don't consider children baggage. I think they're the bonus piece to the set, but there are a lot of men who don't see it that way," she says.

For many women in their 30s, the pressure to get married can be intense. Julie says she isn't feeling that pressure as much anymore. "My original goal was to meet a man, have a family just like I grew up in," she says. "But it just doesn't seem to be going that way."

As a single mom, Amy says the pressure comes from people who feel like something must be missing in her life. "People see me as a single mom [as if] that's something wrong. 'Oh, you poor thing. You'll find somebody.' People will do that kind of thing because they don't feel like it's acceptable, or that you can't do it on your own," she says.

DeChane takes a more relaxed approach. "I am prepared to go with the flow as far as children and marriage are concerned," she says. "I was raised in a family where a number of people, even married relatives, have chosen not to have children. So it's never been the expectation that you have to get married, that you have to have children. It's really more being who you are and having a happy life. That's the focus for me." Oprah:com: Top places to meet men over 35!

For devout Muslim Mubarakah, a 30-year-old mother of four, life in her 30s is about family and career. Married for 14 years, Mubarakah never had to worry about the dating scene.

"Dating in Islam is forbidden," she says. "When you meet someone and you're talking to them, the purpose is for marriage. So you're getting to know someone to know whether or not that's somebody you want to be married to."

In her career as a certified personal trainer, Mubarakah's biggest challenge is finding workout clothes in keeping with her faith. "As Muslim women, we can only show our face and hands," she explains. "Most workout outfits are either short sleeved or too tight." She modifies her clothes by adding length to sleeves and hems, taking care to look cute at the same time. "I try to at least look like I'm matching and I have some kind of style," she says. "So generally my headscarf will match my outfit."

Mubarakah says she encounters many myths about her religion, including her heritage. "People automatically think I'm from another country, but my mother's family is Cherokee, and my father's African-American, so I'm as American as it gets," she says. An open attitude helps Mubarakah deal with misconceptions. "If people don't understand, I just try to be very personable with it," she says. "I'm very open as far as questions."

Commitment to her religion requires Mubarakah to pray five times daily, whether she's working with a client, at the movies or in her living room. Still, she says that American Muslims are just like any other Americans.

"We're no longer immigrants or converts to Islam, but rather American-born Muslims that lead regular American lives. [We] incorporate our Islam beliefs and practices into our every day," Mubarakah says. "In the end, all our goals are the same. All of us want to raise our kids to be contributing members of society, to be healthy, to be happy. And no matter where you choose to worship, every woman wants to know, 'How do you get rid of cellulite?'" Oprah.com: Meet moms around the world

All About Dating • Family