SODDY-DAISY, Tennessee (CNN) -- Kat Koonce loves her Saturns. She owns three, and has pictures of them on Saturnfans.com, where she is one of almost 2,500 Saturn devotees who've posted photo albums of their vehicles. 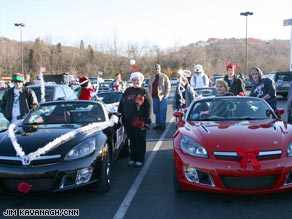 Saturn owners show off their Sky roadsters after a Christmas parade in Soddy-Daisy, Tennessee, on Sunday.

Judy Pearson shows off a photo album of her Saturn Sky roadster the way a grandmother might show off one of her grandchildren -- pictures of vacations and happy times together.

The women are exactly the kind of customers General Motors was looking for when it introduced the Saturn brand two decades ago as "a different kind of car company." The brand's slogan is now one word -- "rethink" -- but its fate may soon be summed up in another -- "done."

General Motors has raised the prospect of eliminating the nameplate as it tries to restructure to regain profitability.

"I just can't stand the thought of them doing away with Saturn," said Dianne Pollard of Hixson, Tennessee. She created the Sky Club of Chattanooga, dedicated to the sporty two-seater.

General Motors hasn't officially announced the end of Saturn, but in a restructuring plan submitted to Congress, the automaker said it would concentrate resources on four core brands -- Chevrolet, Cadillac, Buick and GMC.

That leaves Saturn, along with GM's Pontiac, Saab and Hummer brands, with a dim future.

See how Saturn owners are devoted to their vehicles »

All three have owned other, more sedate Saturns than the Sky, which Edmunds.com praises for "sharp styling, low price and everyday comfort" and Car and Driver.com calls a "mini-Corvette" at around half the price.

They were joined by George and Brenda Holloway, who drove their 2007 Sky almost 100 miles from their farm in Centre, Alabama, to join in the parade.

"We thoroughly enjoy the Saturn. Our next vehicle, when we buy one, will be a Saturn," Brenda Holloway said.

"This is the only car I've ever owned that you can be driving down the interstate and people pull up beside you and take a picture of it," her husband, a retired 20-year Army veteran, said with amusement-tinged pride.

But it's not just the cars -- including the original S series sedans and coupes -- that turn people into "Saturnistas"; it's also the pleasant buying experience and over-the-top customer service.

"It's a family. It's the Saturn family. And you become part of that family," Pearson said.

All three Sky owners from Hixson had stories to tell about a sales consultant who went the extra mile or a service call that exceeded their expectations. Pearson said she has owned many makes of cars, including foreign nameplates, and Saturn's treatment of customers beats them all.

"The best experience I've ever had was with Saturn, bar none," she said.

Koonce, of Dayton, Ohio, used to feel that way, too.

But Koonce now says GM might as well kill off the brand, because that would be preferable to the slow death she sees as inevitable.

Saturn sold slightly more than 8,000 cars in November and has delivered about 175,000 this year. That's a far cry from the half a million GM had hoped to sell each year when it introduced Saturn.

Koonce said she fell in love with Saturn before she was old enough to drive. She became such a familiar figure at her local Saturn dealer and so knowledgeable about its lineup that she was hired as a sales consultant.

Saturn was conceived in the early 1980s as a separate-standing division of GM, with then-unheard-of features:

• a separate agreement with the United Auto Workers that embraced more teamwork between union and management;

• the use of plastics instead of metal for many body parts;

• and a highly personalized consumer experience, including no-haggle buying and "Homecomings," a sort of family reunion for Saturn owners at the Spring Hill campus.

The first Saturn came off the Spring Hill assembly line on July 30, 1990.

Unfortunately, Kat Koonce said, GM has abandoned what made Saturn different. The cars are now made of metal, and the models all have twins in other GM divisions. Even the original Spring Hill factory has been converted to build Chevrolets instead of Saturns; the Saturn VUE is built in Mexico.

So disillusioned was Koonce that she quit her job at the Saturn dealership and went back to college.

"It was a success that became a failure," she said.

Walter S. McManus, the head of the Automotive Analysis Division of the University of Michigan Transportation Research Institute, says he could see it coming.

"Brand loyalty is overrated," McManus stated flatly. "It is costly to do all the fuzzies, and Saturn's example is clear that it doesn't pay off for what is essentially an economy-car company. Women especially appreciated the Saturn way, but Honda sells more cars to women, despite having a less female-friendly approach."

Don't tell that to Charlie Eickmeyer, who runs the Saturnfans Web site and has posted a "Save Saturn" petition for the site's 35,000 members to sign. And don't tell the Sky Club of Chattanooga.

"I think Saturn really is a different kind of car company, and that is what has brought me back to them," Pearson said.