Miracle children survive against the odds

(OPRAH.com) -- A baby who never uttered a word touched the hearts of nearly a million people. 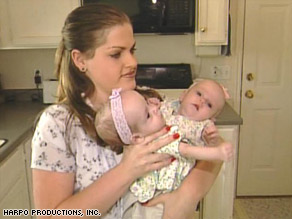 A second-grader with so much courage, people around the world called him a hero.

A 6-year-old boy who was never supposed to walk -- and now won't stop running.

The stories of these miracle children can make you believe that anything is possible.

Oprah met her first two little miracle guests when they were just 4 years old. Conjoined twins Kendra and Maliyah Herrin were born sharing a large intestine, bladder, liver and single kidney. Each sister had two arms, but just one leg. The survival rate for conjoined twins is extremely low, but the girls exceeded all expectations and even learned to crawl -- something doctors said might never happen.

As the twins grew older, their parents, Jake and Erin, faced an agonizing decision. If Kendra and Maliyah continued their lives conjoined, their shared kidney could eventually fail. But doctors had never performed surgery to separate two bodies sharing the same kidney, and there was a chance the twins might not survive.

Erin and Jake made the decision to let doctors separate their conjoined twin daughters when they were 4 years old. After a 26-hour surgery, Erin and Jake got the good news -- the doctors had successfully separated their daughters.

Kendra and Maliyah are now adorable 6-year-olds. They have started first grade and say their favorite part of the day is -- of course -- recess!

Erin says things are going really well for the girls. Each girl has one kidney -- Kendra has the one she once shared with her sister, and Maliyah was given a kidney from her mother. "Especially after Maliyah got her kidney from me, things went a lot better," Erin says.

However, both girls still face a long road ahead and will need back surgery to straighten their spines. Three weeks later they will be fitted for prosthetic legs. "That's a big milestone," Erin says. Oprah.com: Learn more about these miracle twins

The world jumped to its feet when basketball giant Yao Ming walked side by side with 9-year-old Lin Hao at the Beijing Olympics opening ceremony. But who was the little hero waving the Chinese flag?

Lin survived the devastating earthquake in Sichuan on May 12, 2008, that claimed the lives of 20 of his schoolmates. After freeing himself from the debris, Lin risked his own life by going back into the rubble and carrying two of his unconscious friends to safety.

When asked why he took such a dangerous risk, Lin simply replied that he was the hall monitor and it was his job.

Cody also dreams of walking in the opening Olympic ceremonies -- but as a star athlete. It's an ambitious goal for a 6-year-old who wasn't expected to live past his first day, but Cody is used to defying the odds.

When Cody was born, his parents, Tina and Mike, immediately knew something wasn't right. "The doctors got very quiet. The nurses got very quiet," Mike says. "I did notice that his legs looked different -- they didn't straighten out." Mike was told their baby boy had an incurable disease and wouldn't make it through the day. "That's when Mike had told me that we needed to mourn the loss of our son," Tina says.

Miraculously, Cody survived, but he still had a difficult journey ahead. When he was just 15 months old, both of Cody's legs needed to be amputated. "He was fitted with his first prosthesis when he was 18 months old," Tina says. "They did not think that he was going to walk in his first prosthetics right away, and on his second day, I think, or first day of therapy, he started walking."

Cody's love for running gave his parents the idea to put a team together to raise money for the hospital that gave him his prosthetic legs. "These are my running legs, and I run very fast in them and I bounce in them," Cody says. "Since I have different legs, I can do anything."

Cody truly can do whatever he sets his mind to -- and now that he's on a swim team, a certain Olympic superstar better watch out! "Michael Phelps, I'm coming," Cody says. "I'm gonna race you!"

Other than his athletic abilities, there is one thing Cody wants the world to know. "That I'm special," he says.

Tina says her son has always had the drive to exceed expectations, and she and her husband, Mike, are right there to encourage Cody whenever he needs a boost. "When he says, 'I can't,' we say, 'That's not a word allowed in this household,'" she says. "We find a way for him to do it. It might be different than someone else, but we work together and we get through it."

Mike says Cody's spirit is contagious to everyone he meets. "He's always had that about him," he says. "He just walks into a room and absolutely takes over somehow with his personality." Cody even brightens the day of the disabled veterans he's met with who have lost their limbs. "He's never had his limbs, and he's just smiling, bouncing through the room, and just wants to race everybody."

When Oprah first met Milagros, the little girl had already become a symbol of hope for people around the world.

Milagros was born with a rare genetic disorder called sirenomelia, also known as "mermaid syndrome." Her legs were born fused together and she had no external genitalia. Most babies with this condition die during birth or before they are born.

When her parents, Ricardo and Sara, first saw their newborn, they were afraid they had been cursed. "When I finally saw her and saw her little legs, I was shaking and crying," Sara says. "All I could do was cry."

Ricardo and Sara refused to give up hope for their daughter and even named her Milagros, meaning "miracles" in Spanish. Despite the odds against her, Milagros lived to see her first birthday. But without surgery to separate her legs, doctors said she wouldn't live much longer. After a five-hour surgery, Ricardo and Sara, along with the rest of the world watching on live TV, received the miraculous news -- Milagros survived the rare and dangerous operation.

There is another miracle for Milagros. Even though doctors weren't sure she would ever walk, she's here today ... and she's ready to dance!

Megastar singer Celine Dion met Milagros and 11 other special children as part of the book "An Incredible Journey with Celine Dion: 12 Heroes Among Us." The children's stories were compiled by correspondents from Readers Digest, and the proceeds will benefit children all over the world.

"It's an amazing project because you can read and learn about those miracles and heroes -- babies, children -- you can learn about those stories, and all the proceeds go for needy children and sick children," she says. "It was a blessing."

When he was 12 years old, Donald lived through one of the most destructive disasters in American history, Hurricane Katrina. As the water filled up his house, Donald climbed on top of the refrigerator, and his mom got on the counter.

Eventually, Donald's mom lost her grip on a curtain rod and drowned. In that moment, life without his mother seemed so unbearable that Donald decided to end his life. "I completely gave up. I decided to, you know, just sink to the bottom," he says. "I didn't hold my breath, because I just wanted it to happen as quick as possible."

Donald says as water began to fill his lungs, his will to survive took over and he paddled toward the only light he could see -- a shattered window. "I think some spiritual force or God shattered that window as a final attempt of escape," he says.

Donald paddled out, cutting himself on the shards of glass sticking out, and climbed to the roof of his house. For the next 13 hours, he stayed on roofs above the flood line, waiting until help arrived.

Three years after Katrina, Donald is now 15 and living with an aunt. He says the moment when he considered suicide, something told him it wasn't his time. "I did a lot of thinking to myself in those short few seconds," he says. "Something, almost a guardian angel, said, 'Live and move on because you have extraordinary things ahead of you.'"

On the roofs of houses, Donald says he and another young man he met waited for their rescue. They were able to signal for help with the light of the other man's cell phone.

After their meeting in Montreal, Quebec, for "An Incredible Journey with Celine Dion: 12 Heroes Among Us," Celine says Donald's story of survival is an inspiration. "I wish for my son to have the strength that you have," she tells him.

Two months before he was born, Eliot was diagnosed with Trisomy 18 -- a genetic disorder with a very low survival rate. His parents, Matt and Ginny, began writing letters to him daily. Oprah.com: Get Matt and Ginny's heartwarming update

"Dear Eliot: Right now you are two months from being born," Matt wrote in one letter. "Doctors tell us that you won't likely make it to birth. Your mom and I are praying against that. We're praying for healing. We are praying for nothing less than a miracle. You're our first child, and the day of your birth couldn't come sooner."

Against the odds, Eliot survived his birth. "You are already a miracle to us," Matt wrote that day.

Every day that Eliot lived, he beat the odds. The median life span for children with Trisomy 18 is just five to 15 days -- but Eliot just kept on surviving.

Matt and Ginny's letters to their infant son continued for 99 precious days. They turned their letters and literally thousands of photos of Eliot into a video that has now been seen nearly a million times on YouTube.

Matt and Ginny joined Oprah and Celine from their living room in Fayetteville, Arkansas. And they have some big news -- they are expecting another baby!

Matt says their tribute to Eliot started as a blog, which they used to keep friends and family updated on his status even before he was born. "Once he was here, we just took a lot of pictures and took a lot of video, and we knew we wanted to put that together in some way to tell the story of his life."

Celine is moved by that idea. "Life imposes things on you that you can't control, but you still have the choice of how you're going to live through this," she says. "Once you know the diagnosis and it's not good, then you make the best of it."

"We celebrate you," Oprah says. "What an inspiration your family has been to the world."

All About Oprah Winfrey