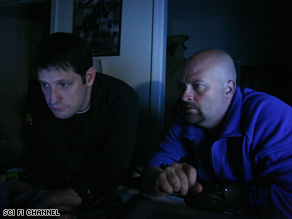 Human forms materialize in darkened hallways. The dead whisper greetings from beyond the grave. Unseen entities attack and hurl terrified people to the ground.

Every day is Halloween for Wilson, co-star of the Sci Fi Channel's hit show, "Ghost Hunters." Close encounters of the paranormal kind would drive most people to look for another hobby, but Wilson says he ain't afraid of no ghosts.

"That's part of the job," says Wilson, who investigates suspected hauntings with his co-host, Jason Hawes.. "We tell everyone that we train that you'll be punched, slapped and grabbed. Be prepared for it."

Anyone who has watched their 401(k) account evaporate during the recent stock market dive knows something about horror. But Wilson is part of a growing community that prefers getting their chills the old-fashioned way. They are ghost hunters, or, as they prefer to be called, paranormal investigators.

"Ghost-Hunters," which airs a special live show at 7 p.m. Halloween night, is helping lift the stigma once attached to paranormal investigators. The show has become so popular that the group featured in each episode -- The Atlantic Paranormal Society - has spawned imitators across the United States and affiliates in 12 countries.

TAPS, as the "Ghost Hunters" group is informally known, even has its own "Beyond Reality Radio" show, magazine, lecture tours, T-shirts --and groupies.

"Five or six years ago, you'd be embarrassed to sit around the water cooler talking about ghosts, but now everybody talks about it -- it's gone mainstream," Schrader says.

It's also gone Hollywood. Paranormal shows like "Paranormal State" on A&E Television; "Haunting Evidence" on truTV (which, like CNN.com, is owned by Time Warner); "Dead Famous" on the Biography Channel; and "A Haunting" on the Discovery Channel are trying to mimic the success of "Ghost Hunters."

"Everybody I know has a pilot in development -- including me," Schrader says. "They throw it around like Frisbees. It's become a joke."

The paranormal shows have also created a paranormal circuit. Families and friends attend ghost-hunting conventions, retreats (one was dubbed "GhoStock,") swap tips on ghost-hunting gear and make pilgrimages to famous haunted places like The Stanley Hotel in Colorado, the setting for the Stephen King movie, "The Shining."

Why they chase ghosts

Many of these amateur paranormal investigators are inspired -- and freaked out - by what they see on "Ghost Hunters."

Some of the incidents recorded by "Ghost Hunters" are mystifying: Ghostly forms appear on camera, chairs lurch across rooms by themselves and voices of people long dead are played back to their wide-eyed relatives.

In one of the most famous "Ghost Hunters" episodes, a cameraman is grabbed and hurled to the ground --though no one appears to touch him. The cameraman is so shaken that he sobs and quits the show.

Wilson says people who think they have a ghost at home should not try a do-it-yourself home ghost repair. A person who uses Ouija boards or anything else to contact ghosts can unleash malevolent spirits.

"You might not be ready for what happens," Wilson says.

Watch Grant's encounter with a ghost »

Some ghost-hunters say they entered the field because, like Wilson, they had personal experiences with the supernatural. Others want to know if there is something beyond death.

Others like Marley Gibson, an author and paranormal investigator says they're more scared by current events.

"We're living in a world where we're fighting two wars, we've got poverty, homelessness, people not having health care and a job -- people want escapism," says Gibson, author of "Ghost Huntress: The Awakening" a forthcoming book that follows the exploits of a 16-year-old girl who forms a paranormal research team.

Ask ghost hunters if they get scared and many give the same reply -- I don't do scared, just startled. Gibson says many ghost-hunters go into investigations armed with strong spiritual beliefs.

"I've never met such spiritually-grounded, religious, God-fearing people as I have in the paranormal community," she says.

Schrader had one last December, when he apparently took his job home with him one evening. He visited his ex-wife and children after coming back from a ghost-hunting retreat and decided to spend the night in the basement.

Around three in the morning, he says, he heard his then one-year-old daughter screaming. He ran upstairs to hear her say that a shadow was watching her in her room. He comforted his daughter and returned to sleep downstairs.

His wife then called him an hour later on his cell phone from her bedroom and whispered: "Get up in my room. There's something here and I can see it."

Nothing was there but Schrader says some spirits had apparently thought it was OK to pay a visit to his family. He says people who are open to the existence of ghosts sometimes become "beacons" that attract spirits.

Schrader decided to solve the problem by calling for a supernatural version of pest-control. He blessed the house with holy water and called in two "demonologist" to cleanse the house. No more ghosts.

Patrick Burns, a paranormal investigator and co-host of "Haunting Evidence," had one of his teeth-chattering moments when there was no one around to call.

He says he was working on a documentary on ghosts from his home computer one night when he felt something touch him.

"I felt a very pronounced poke with a very large finger, or possibly a paw, just above my beltline on the back," he says.

Now the average person might have taken that as a cue to run from the room. But Burns is a professional, and besides, he has his own paranormal television show. He shrugged and kept working.

Then, he says, he felt the room temperature drop. Cold spots are often associated with hauntings, but Burns kept working because, as he said later: "No way is my house is haunted."

Finally, he heard a thud that sounded like a body slammed against the wall. The impact is so hard that it shook the house, he says.

"I throw off my headphones and say, 'Okay you have my attention now,' "Burns says. "After that, nothing else happened. It just wanted me to acknowledge that it was there."

Wilson, the "Ghost Hunters" co-host, says he's more leery of people than ghosts. Paranormal investigators like him and Burns are now so famous that they have adoring fans.

Wilson is a Roto-Rooter plumber by day, but he had to stop answering residential calls because too many people were breaking their toilets just to meet him Hawes, his ghost hunting/plumbing partner.

Though Wilson says he's never been scared by a ghost, he still sounds shaken by one encounter.

He says he once met an entity that displayed a personal interest in him. She appeared in front of him, displayed a tattoo of his face stenciled on her leg, and asked him what he thought.

The "entity" was a fan Wilson met during a public appearance.

"That," Wilson admits, "was a little scary."

All About Parapsychology and the Paranormal • Religion