(The Frisky) -- Don't you just hate the type of person who smugly informs you, "I don't watch TV," like that's something to be proud of? They think they're so great with all their fancy book learning. 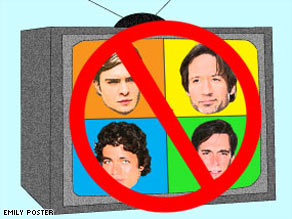 What they don't realize is that TV isn't for dummies -- there's tons of educational programming available -- you just need to know what to watch. I mean, you can learn your ABCs with "Sesame Street's" Grover, how to make gnocchi with Mario Batali, and the ins and outs of prettying up your home with any number of programs on HGTV.

Television is also a great romance resource. Think of all the great TV twosomes we've seen over the years -- Lucy & Ricky Ricardo, Judy & George Jetson, Spencer Pratt and Heidi Montag ... but not all TV personalities set such a sincerely loving example. It's also a good place to learn which type of guy you should avoid.

Here are a few examples:

Chuck Bass ("Gossip Girl"): Few men can pull off lavender argyle, but Chuck Bass is definitely one of them. Moody and sinister, when Chuck Bass Types (CBTs) like you, it's as though you've been inducted into a secret society of two.

It's you against the world and the CBT will bring out a dark side you might not have even realized you possessed. Whip smart with a caustic wit, he'll charm you all the while tucking away your secrets for use at a later date. And use them he will. Because when a CBT tires of you, he won't just say "see ya," he'll decimate you.

Hank Moody ("Californication"): Some boys take longer than usual to grow out of their Charles Bukowski-wannabe phase. Exhibit A is Hank Moody. Actor David Duchovny, playing what the tabloids would have you believe is an autobiographical role, has managed to hang onto his Bukowski-phase well into his forties. Drinking, partying, and resisting monogamy, Hank still manages to attract more ladies than hotter men half his age.

Of course the only women drawn to Hank are either damaged girls with daddy issues or the type of dame who doesn't feel complete unless she has some mess to clean up after. If you see yourself dating a Hank Moody type, do not walk -- run -- to your nearest mental health professional.

Vince Chase ("Entourage"): Those big blue eyes and that floppy mop o' hair... you can forgive him for making a stinker like "Medellin," can't you? Sure, but do you really want to deal with someone who lives in a dude cocoon? Not only does he live with his brother and two best friends, he can't make any decisions without polling the group.

On the upside, he's rich! On the downside, he's famous, which means other women are throwing themselves at him constantly. Vince might be fun for a fling, but forget about bringing him home to mama.

Don Draper ("Mad Men"): Why is it when unattractive people are quiet we just assume they're stupid and/or boring, but verbally challenged hot people get pegged as mysterious and smoldering?

Mad Men's smokin' hot Don Draper actually is mysterious (and smoldering!), so I don't know what point I was trying to make (because I'm all distracted from the photos on his IMDB page)... oh, wait! The point I'm trying to make is that while Draper is indeed mysterious, he's also a liar, a cheat and a cad. So if a DDT tries to slip you his number, just say no and send it to me. What? Strictly for research purposes.

All About Television • David Duchovny