(OPRAH.com) -- For any mom who's ever felt frazzled, overwhelmed or rushed, Oprah says this show is for you. "It's your wake-up call to slow down," she says. "What happened to my guest today could so easily happen to any of you." 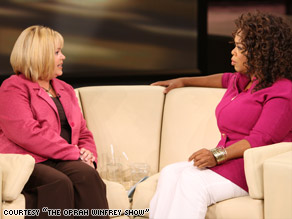 Brenda Slaby still blames herself for her daughter's death. She tells moms to slow down and appreciate their kids.

Brenda Slaby says she was once an assistant principal and mother of two who tried her best to be "supermom."

"It was very hard trying to be the perfect mom and the perfect employee," she says. "I try to be everything to everybody... I've always been the kind of person that lived for doing things for other people."

Then, on a hot August afternoon in 2007, she says she went from being a good role model for children, a good administrator and a good parent to being the most hated mom in America.

When Brenda woke up on August 23, 2007, she says she knew she had a busy day ahead of her. Summer vacation was coming to a close, and it was the first day back for teachers at her school. That morning, the rush to get out the door was more frantic than usual, she says.

Brenda and her husband, Gary, got their two young daughters, Allison and Cecilia, dressed and ready to go. Then, in a departure from their regular routine, Brenda loaded 2-year-old Cecilia into her car to take her to the babysitter's house.

"I had a dentist appointment, and I asked Brenda to take Cecilia," Gary says. "I normally took both Cecilia and Allison, dropped Cecilia off at the sitter and Allison off at preschool."

With Cecilia sleeping in the backseat, Brenda pulled out of the driveway at about 6 a.m. When she realized it was too early to drop her youngest child off, she decided to run a quick errand. Brenda stopped at the store to buy doughnuts, a treat for the returning teachers.

After loading her car with snacks, she got on the road that led to her school and drove straight there. With her mind racing through all the things she needed to accomplish before teachers arrived, Brenda got right to work. "I had lots of things to set up," she says. "I was nervous and frantic that morning because it was such an important day to get the school year [off] to a great start."

The day began with a staff meeting, followed by lunch. While chatting with new teachers between meetings, Brenda says she talked about her daughters. "My feeling was it was a great first start," she says. "It was going to be a great school year, and it was a great start to the day."

At about 4 p.m., Brenda was in her office, getting ready to head home when all hell broke loose. "A good teacher friend of mine -- sometimes I think it was a blessing it was her -- was on her way home, and she walked by my car," Brenda says. "She ran into my office and she said, 'Brenda, your baby's in the car.'"

Brenda immediately grabbed her keys and raced to the parking lot. "I knew what I was going to find," she says. "I opened my car door, and I remember hearing the voices around me. Teachers who were close to me [were] screaming."

When she got to her car she found Cecilia in the backseat, still strapped into her car seat. Brenda says she grabbed her daughter out of the car as fast as she could, but she knew it was too late.

"I knew she was gone as soon as I picked her up, I knew," she says. "I remember I took her, and I ran through the parking lot with her, screaming her name. Then, what brought me kind of to consciousness, I guess, was somebody from the cafeteria yelled for me to bring her here."

Brenda says she handed her lifeless daughter to someone who tried to revive her. Then, she retreated to another part of the cafeteria and began to pray. "I heard people yelling for ice, and I sat in a ball and I prayed," she says. "I prayed harder than I've ever prayed in my life... But I knew she was gone."

Cecilia died of a heatstroke after being left in the car for nearly eight hours. Outside, temperatures had reached 100 degrees.

Gary was working when he received a frantic call from Brenda's principal. "He said, 'Get over to the school right now,'" Gary says. "And I said, 'What's up?' [He said,] 'It's an emergency.'"

In the car on the way to his wife's school, Gary says he never considered that his child's life might be in danger. "The whole time I'm thinking, 'What disgruntled employee did something crazy?'" he says. "I said, 'Well, maybe something happened to Brenda.'"

When Gary pulled into the school parking lot, he says he saw a lot of commotion. Brenda's principal pulled him off to the side to tell him what happened. "He looked at me and he says, 'Cecilia's dead,'" Gary says. "I didn't even think to ask him, 'How? Why?' I just got up and sort of walked off to be by myself. I was just in shock. I didn't know what to do."

Despite his grief, Gary says he has never blamed his wife for Cecilia's death. "I could have done the same thing very easily," he says. On nights when his wife had to work late, Gary says she'd ask him to pick up the girls from the babysitter's house, a break from their normal routine. A few times, he says he forgot. Oprah.com: How to heal your grief

"I get out of work thinking about what I'm going to do when I get home, this and that. I'm going up the highway, [I realize,] 'Oh, my gosh. I left her at the sitter's,'" he says. "I would have to turn around, go back and get her."

Gary doesn't hold Brenda responsible, but Brenda still blames herself. "I realized the most important person in the world to me lost out because I didn't plan well enough," she says. "She's the one that slipped through the cracks."

The day Cecilia died, Brenda was taken to a police station where she was questioned for more than two hours. During her emotional confession, she says police officers were empathetic. "Never during the questioning did they seem accusatory," Brenda says. One officer assured Brenda that no one thought she meant to hurt Cecilia.

Brenda, on the other hand, was not easy on herself. "Good mothers don't do this," she said during the questioning. "How could I not think of my daughter? I want to die. I just want to die."

Brenda admits she had left Cecilia in a running car before, but she says she never made a habit of it. "The day that Cecilia died was so different because I completely forgot that she was there," she says.

While the police may have been empathetic, Brenda says her community was not. "My community was in outrage," she says. "I was the most hated mom."

Although Brenda says her staff and principal were wonderful to her, she says the decision makers in the school district decided they wanted nothing to do with her. Oprah.com: How to slow down

Although coping has been difficult, Brenda says she has found a higher purpose that is helping her move forward. "Almost immediately, I said, 'How am I going to make something out of this?' I have been given this to bear for a reason, and I'm not going to let Cecilia's life be in vain. That I'm going to use what I've learned in this whole process to change lives for other people."

Brenda says the lesson she learned that she wants to pass on to other moms is to slow down -- don't become overwhelmed with perfection. "I've learned to say a lot, 'It just doesn't matter,'" she says. "The house doesn't matter, the perfect dinner doesn't matter -- the kids matter."

From "The Oprah Winfrey Show," "A Overwhelmed Mom's Deadly Mistake" © 2008