Christina Applegate: Why I had a double mastectomy 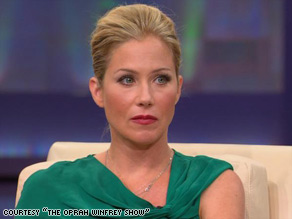 "It doesn't feel the same, and it's hard to carry your purse," Christina Applegate says. "I cry at least once a day."

During her teenage years, she lit up the small screen as Kelly Bundy on the hit sitcom "Married with Children." After 11 hilarious seasons, Christina's career branched out to the big screen and Broadway.

In 2007, Christina landed the starring role on "Samantha Who?" an acclaimed comedy series. After receiving Emmy and Golden Globe nominations for her performance, it seemed that nothing could stop Christina's triumphant return to TV.

Then, in April 2008, shocking news silenced the laughter. At 36 years old, Christina was diagnosed with breast cancer. At first, Christina says she lived quietly with the disease. "It's hard to live quietly," she says. "I went through five weeks of work without telling anyone that this was going on in my life."

Now, Christina is going public with her personal battle to raise awareness among young women who may not think they're at risk.

As the daughter of a breast cancer survivor, Christina says she's been vigilant about getting regular mammograms since she was 30 years old. In 2007, doctors recommended extra precautions.

"My doctor said that the mammograms weren't enough for me because of the denseness of my breasts," she says. "He suggested that I get an MRI."

Christina went in for her first MRI screening, which produced disturbing results. "They found some funky things going on [in one breast]," she says. Doctors told her they needed to perform a biopsy. Then, the excruciating waiting game began.

Christina continued to work and promote her sitcom, but the impending results were never far from her mind. A week later she says she got the phone call every woman dreads. "[The doctor said], 'It came back positive,'" she says. "Right now I'm sitting here shaking remembering that moment."

Doctors explained that the cancer was only in her left breast, and thankfully, they caught it at an early stage. Christina says she held back her tears and immediately went into survival mode.

The day after her diagnosis, Christina says she went in to see an oncologist and a surgeon. "I'm a Sagittarius," she says. "We need things done now. So, for me, I had to get in now, and I wanted to have my surgery now."

Within a week, Christina had her first lumpectomy. Doctors also did a biopsy of her lymph nodes to make sure the cancer hadn't spread. Since the cancer was caught early on, Christina was told she'd need six weeks of radiation instead of chemotherapy.

Then, she received more life-changing news. A test for the BRCA gene -- also known as the "breast cancer gene" -- came back positive. Oprah.com: Should you get tested for the gene?

"That sort of changed everything for me," she says. "Radiation was something temporary, and it wasn't addressing the issue of this coming back or the chance of it coming back in my left breast. I sort of had to kind of weigh all my options at that point."

Christina was given two options... go forward with the radiation treatments and continue testing for the rest of her life or have both breasts removed.

Christina made the dramatic decision to have a bilateral mastectomy. "It came on really fast. It was one of those things that I woke up and it felt so right," she says. "It just seemed like, 'I don't want to have to deal with this again. I don't want to keep putting that stuff in my body. I just want to be done with this.' & I was just going to let them go."

Before she went in for her surgery, Christina says she staged her first -- and last -- nude photo shoot. "I made sure that I have close-up photographs of them from every angle so I can kind of remember them," she says.

Christina's tears finally spilled over the day she met her surgeon. "I met with my doctor, and I told him that was my decision," she says. "He brought the surgeon in, and it was like it was the floodgates just opened up and I lost it." Oprah.com: Going through a double mastectomy surgery

In July 2008, Christina went through with the surgery, which has left physical and emotional scars. "It can be very painful," she says. "It's also a part of you that's gone, so you go through a grieving process and a mourning process."

Before she went under the knife, Christina says the only mastectomy she'd ever seen was the one her mother received. "[Her surgery] was in the '70s, and they didn't do a very good job back then," she says. "So in my own mind I'm thinking, 'My God, I'm going to be butchered, and it's going to be horrible. I'm never going to love that part of me again.' & But I did a lot of research, and they can make some pretty boobies."

Currently, Christina says she has saline expanders in her body, which will make way for the new implants. Though she's proud of her proactive decision, she says she's reminded of her loss every day.

"It doesn't feel the same, and it's hard to carry your purse," she says. "I cry at least once a day about it because it's hard to overlook it when you're standing there in the mirror. When you look down, it's the first thing you see... So you're reminded constantly of this thing -- this cancer thing that you had."

On the bright side, Christina says she won't have to wear a bra ever again. She also feels victorious in the fight against breast cancer. "I have taken a very progressive stance in the rest of my life," she says. "For that, I'm really grateful."

Days after her diagnosis, Christina says she reached out to family and friends, including Melissa Etheridge, a Grammy winner and breast cancer survivor. Melissa shared the lessons she learned during the fight for her own life.

"The first thing she said to me is: 'Christina, this is a blessing that's happened to you in your life. Right now, you get to start over, and right now you get to change everything -- the way that you deal with things in life, the way that you react to things. Fear can hurt you. Stress can hurt you. This is the time that you have this opportunity to change the way you eat... everything you do,'" Christina says.

Christina now looks at her health scare as a blessing. "I am a 36-year-old person with breast cancer, and not many people know that that happens to women my age or women in their 20s," she says. "This is my opportunity now to go out and fight as hard as I can for early detection."

As she's learned, early detection may not come from a mammogram. Christina says she will fight for women to have access to MRIs and genetic testing, which many insurance companies won't pay for.

Christina says her health scare has shifted her priorities completely. "[There's] this need and this desire to make every single day count," she says. "I used to say... 'Don't sweat the small stuff -- not even the big stuff.' At the end of the day, none of it matters but your own joy, your own spiritual journey that you go on, God, your loved ones, your friends, your animals. These are the things you've got to cherish and love and embrace."

From "The Oprah Winfrey Show" "Christina Applegate: Why She Had a Double Mastectomy" © 2008

All About Breast Cancer • Christina Applegate