LOS ANGELES, California (CNN) -- Misha Di Bono zips around town in her Infiniti sport-utility vehicle, breezy and unconcerned about the price of gas. 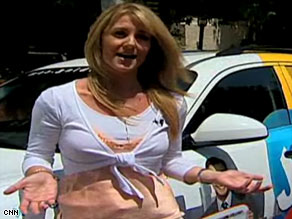 Misha Di Bono says people used to make fun of her rolling billboard. She gets $500 a month and free gas.

That's because she gets $500 a month -- plus free gas -- for turning her car into a rolling billboard for Jobing.com, the online recruiting company she works for.

"People used to tease me about the 'Jobing' mobile, and now they're like, 'Oh, we'll get Misha to drive,' " she said, standing next to her decal-covered car.

Jobing.com might be the most extreme example of how companies are helping employees during the current gas crunch. But with gas averaging more than $4 a gallon, more and more companies are trying to figure out incentives to help ease the pain at the pump for their employees.

Watch a rolling billboard for your company »

"There's no question companies are feeling the pinch," said John Challenger, the chief executive officer of global outplacement company Challenger, Gray and Christmas. "It's an important issue because no company wants to lose its people."

His firm recently surveyed about 100 human resources executives at white-collar and blue-collar companies. The survey found that 57 percent of the companies offer programs to help ease commutes.

The most popular option was reducing the work week from five eight-hour days to four 10-hour days. Twenty-three percent of the companies polled have such an option, Challenger said.

Calculator: How much do you need to work to pay your gas? »

"We're at a watershed time of how people go to work," he said. "Maybe the gas crisis will be the real trigger."

The survey reports that companies had seen a recent jump in carpooling of 43 percent and a 23 percent increase in the use of public transportation. Still, 31 percent of the companies saw no increase in their employees' commuting behaviors.

See gas prices around the country »

Some of the companies have had the incentives for years, but it's taken the soaring gas prices for employees to look more closely at the programs.

"It's something that is much more important than two years ago," Challenger said. "It's hard to get away from, because you're constantly going back to the gas station."

One company offering generous commuting benefits is online giant Yahoo, which rewards employees who organize carpools, ride bikes to work and take company shuttles to and from offices. Yahoo rewards these green-conscious commuters with free movie tickets, lunches, massages and other benefits. iReport: How is your company helping you

"We've really been listening to our employees to make sure we help them find ways to make the cost of the commute a little less excessive," said Barbary Brunner, a Yahoo vice president.

But it is the Jobing.com vehicle that is most eye-popping. Company spokesman Joe Cockrell says the company started the rolling billboard cars in 2001, but only three executives took part in it.

But now, 60 percent of its 270 employees nationwide drive the cars.

Watch a shift from marketing ploy to employee benefit »

"This year, for the first time, we've had a long waiting list for our wrap," Cockrell says. "It's basically a huge sticker that goes on your car and should last in theory about three to four years."

They do have rules: The car can't be older than three years, and employees must take a driving safety course and have clean driving records.

Once the cars are wrapped, employees shouldn't flip the bird at other drivers. The company did have to "unwrap" one employee's car because he got too many speeding tickets.

Cockrell says the program has proved to be a huge win-win. "These are mobile billboards, and wherever our employees go, so does that billboard."

Di Bono, who works in community relations, says she loves it, too. She says the cost of filling her tank has doubled in recent years. Now, her company pays her to drive her car.

"They pay for everything," she said. "They pay for me to go to all my appointments and anything I want to do on my own time."

She added, "You'd be a fool not to take advantage of it."

Although many people across the nation are seeking help from their offices, an iReporter in West Virginia recently stopped using his company car and began using his old clunker again.

Maurice Alouf's company paid for his V-8 Chrysler sedan, but he says it guzzled gas on his 80-mile round-trip commute. The company didn't offer a gas allowance, and it was costing him more than $60 a week to fill up.

So he dusted off his 50-mile-per-gallon Geo Metro.