Caffeinated moms drink up to keep up 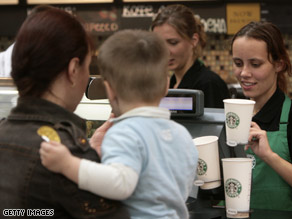 More moms say they're leaning on caffeinated beverages to get through the day.

Americans are consuming caffeinated beverages as never before. In fact, energy drink sales skyrocketed in 2007. The sale of Rockstar, which contains up to 360 mg of caffeine per can, compared with 80 to 150 mg per serving for coffee, rose 38.9 percent in 2007, according to Beverage Digest. Red Bull sales rose 19 percent.

All this caffeine consumption has given rise to growing numbers of "caffeinated moms." A study by an independent nonprofit research group, The National Sleep Foundation, found that more than 65 percent of moms drink caffeinated beverages to get through their day.

"I can definitely say without a doubt that I am addicted to caffeine," said Sarah Kripal, mother of two from Lincoln, Nebraska. "I need about four energy drinks, three cups of coffee and a six-pack of soda every day."

Watch Dr. Sanjay Gupta talk about how much caffeine is too much »

Author and parenting expert Stacy DeBroff says today's moms are the busiest ever. "We have crammed lives. We work full time, our kids our busier than ever, and we are finding ourselves always on the go."

Caffeine is infused in a modern consumer's life, DeBroff says. A single cup of coffee no longer makes do. "I'm just waiting for someone to invent a caffeine patch that we hit in the morning and we say, 'Time to wake the kids. We're ready to go!' "

What's in Your Cup?

Caffeine works by suppressing the neurotransmitters in your brain that would normally release nerve impulses that make you tired. This is one reason caffeine is addictive, experts say. People start to depend on the boost of energy it provides.

But what effect is that having on your health? Research shows that caffeine can trigger migraines, heartburn, gastrointestinal problems and put women at an increased risk of miscarriage.

Caffeine consumption also has an impact on your heart.

"It makes you nervous, jittery, pulse races, premature heartbeat," said Emory University cardiologist Dr. Allen Dollar. "But the good news is, those are very short-term effects and have no long-term consequences whatsoever."

Dollar says that although he recommends limiting caffeine intake, other lifestyle habits are more damaging to your body. "There are a lot of things I spend time counseling my patients about, such as overeating, smoking cigarettes and drinking alcohol, but I don't spend a lot of time worrying about caffeine consumption."

The bigger issue may be the addictive nature of caffeine. "Needing any type of stimulant to get through your day is dangerous," Dollar noted.

Lindy Smith, a mom of three in Forest Lake, Minnesota, says she needs caffeine just to get through the day. "I usually drink two to three pots of coffee a day. I am sure this is not good for me, but how do you keep up?"

One way to boost your energy naturally is develop a balanced sleep schedule. According to the National Institutes of Health, most adults need seven to eight hours of sleep a night. You can fall asleep quicker by not consuming caffeine after 5 p.m.

"It turns out that caffeine actually lasts in your body for quite a long time," Dollar said. "It takes about five hours to get rid of half of the caffeine you've ingested."

Proper diet and exercise also play a role in your energy level.

DeGroff suggests that amid a busy schedule, striving to take at least 10 minutes out of your day for a break can make a difference. "Close your eyes or read a book, just look for something to restore your natural sense of moment. It will elevate both your energy and your mood."

Like most things in life, the key to caffeine intake is moderation. Experts agree, 200 milligrams of caffeine a day is a healthy amount. That is between one and four drinks, depending on your caffeinated beverage of choice.

Danielle Dellorto is an associate producer with CNN Medical News.

All About National Sleep Foundation • Parenting