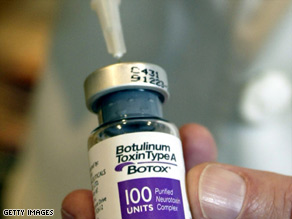 Botulinum in its purest form is a deadly poison, but it can help stroke victims with pain.

Botox is considered a poison with a purpose. Millions of Americans use it to help smooth their wrinkles. As more people use Botox as the ultimate wrinkle remover, doctors are realizing that its benefits go far deeper than the skin. Now it's being used to help stroke victims. A study showing these benefits was released in October 2005.

Dr. Sanjay Gupta, CNN chief medical correspondent: Botox is a brand name for botulinum toxin type A. It's produced by the bacterium Clostridium botulinum. In its purest form, botulinum is one of the deadliest poisons known to humans. It can cause death by paralysis.

What does Botox do?

Gupta: In 1989, long before physicians injected Botox into faces to smooth wrinkles, the FDA approved it for patients with debilitating neurological diseases such as dystonia. In these conditions, faulty connections between brain and muscle cause parts of the body to spasm. Muscles are locked into uncomfortable, often excruciating, positions. Amazingly, Botox liberated many of these patients by actually chemically allowing their muscles to relax. On a basic level, that is what's happening with Botox for wrinkles -- the muscle is loosening its grip on facial skin.

This ability to stop the brain from triggering the muscle malfunction led researchers to use Botox for a whole host of other conditions. Up to four in 10 stroke survivors suffer from spastic disability. You may recognize it as stiffness on one side of the body, often seen in a club-like hand or foot. These people lose their independence -- the ability to wash themselves, to eat, even walk. Botox has been used for years in these stroke patients in combination with physical therapy. It allows some of them to gain back mobility and function in their muscles.

Is Botox the perfect solution?

Gupta: Botox isn't a cure-all. It can have minor side effects and more studies need to be done on long-term use. But for many patients, Botox provides the muscle relief that will allow them to better move their muscles.

Does it matter how much time lapses between the stroke and the patient getting Botox treatment?

This is definitely a case where the sooner the patient can receive the treatment, the better, so that they can regain mobility and function of their muscles.

Dr. Gupta interviewed stroke survivors and experts on this topic. Here are excerpts:

Gupta: It's called disabling spasticity, affecting as many as four in ten stoke survivors. It can mean a life of constant discomfort, pain, a loss of independence.

Edward Rosa, stroke survivor: Lots of stroke patients have fists clenched so tight that their nails dig into their palm, for instance, and that causes them a great deal of pain.

Gupta: In a stroke, blood flow to the brain is disrupted, brain cells die, and the connections between the brain and the muscles malfunction.

A clenched fist or foot often means that neurons are constantly firing and muscles cannot stop clenching. Since his stroke in 2000, Rosa tried everything to get moving again -- medications, acupuncture, biofeedback. Nothing worked, until he tried Botox.

Rosa: Most people think Botox is a cosmetic thing, and they don't realize that it's a muscle relaxer.

Dr. Elie Elovic, Kessler Medical Rehab Research and Education Center: For, you know, a period of months, it will cut the connection to the muscle in the area you injected.

Gupta: Today it's best known for its cosmetic uses to reduce wrinkles. But Botox was originally used to treat disabling neurological diseases. Botox temporarily blocks nerve cells from sending impulses to the muscles, basically smoothing out the muscle under your skin.

Rosa: It's a tool. I can't stress that enough. Botox is a tool. It enables you to exercise, to function.

Gupta: A very effective tool. In a study of 279 patients, almost half saw improvement.

Elovic: The real functional improvement has already been demonstrated with Botox.

A simple task like taking off the cap on a pen and writing was previously impossible. In fact, Ed Rosa now drives himself to work every day and has even thrown out his wheelchair. He still undergoes therapy for four hours every week and exercises on his own.

Rosa: You don't have to be a burden to your family. It enables you to do things like dress yourself, shower yourself.

Gupta: It's not a miracle treatment, but it is a world of difference for patients with limited options.

All About Stroke • Botox