Specter on cancer battle: 'Never give in'

WASHINGTON (CNN) -- Sen. Arlen Specter woke at 4 a.m. one day last week with an excruciating headache, a side effect of chemotherapy. Ninety minutes later, he was on the squash court, playing a partner less than half his age. That's the way Specter faces cancer and chemo. Borrowing a phrase from Winston Churchill, he calls it the "never-give-in" approach. 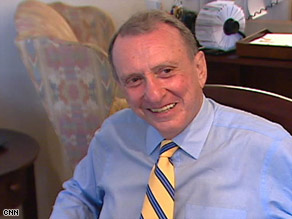 Sen. Arlen Specter on May 7, early in his chemotherapy for Hodgkin's disease.

As he battles a recurrence of Hodgkin's disease, Specter, 78, a Pennsylvania Republican, plays squash nearly every day, as he has for decades. He calls the games "deposits in the health bank." He also continues his rigorous work schedule.

"Doc," he told CNN's Dr. Sanjay Gupta, "I don't have time to think about Hodgkin's."

Hodgkin's disease is a rare but curable form of lymphoma. But the treatment feels, as Specter puts it, "like a war of the worlds raging inside your body."

Early this month, just after CNN was granted exclusive access to follow Specter's treatment, his colleagues would stop him in Senate hallways to tell him how good he looked. He would always fire back: "In a few days, I'll be thin and pale and bald."

His prediction is already coming true as he reaches the halfway point in his three-month-long regimen of weekly chemotherapy.

Specter has been through one major health crisis after another over the past 30 years.

At age 48, he was told he had Lou Gehrig's disease, an incurable degenerative condition. Several months passed before he was told that the diagnosis was wrong and that a mild case of childhood polio had produced a false positive.

Then, in 1993, Specter was told that he had a cancerous brain tumor and had just a few weeks to live. Another misdiagnosis. The tumor was benign and safely removed. It returned three years later and was removed again.

Two years after that, in 1998, he had heart bypass surgery, after which he nearly died in the hospital.

And then, in 2005, after a stressful battle to win the powerful chairmanship of the Senate Judiciary Committee, he began suffering from extreme exhaustion, fever and night sweats. Doctor after doctor told him he had a virus. Yet another misdiagnosis.

Finally, after several months, a blood test indicated something more serious. Specter had Hodgkin's disease, a cancer of the lymphatic system that's diagnosed in only about 7,500 patients in the United States each year. Specter's was in the most advanced stage. He beat it. But it's back.

Specter is 78. But his oncologist, Dr. John Glick of the Abramson Cancer Center at the University of Pennsylvania, stresses that chronological age is not the key determinant of how he's treating Specter.

Because of Specter's physical conditioning and his mental attitude, Glick found the senator to be a strong candidate for aggressive treatment. "The same treatment we would give somebody half his age," Glick said.

Specter's continued hard work throughout treatment may be beneficial, his cardiologist says. Specter should "keep on working as aggressively as he always has, says Dr. Howard Weitz of Thomas Jefferson University Hospital in Philadelphia, Pennsylvania. "I think for the hard worker who ceases working, their stress level increases."

When Specter learned that his Hodgkin's had returned, it was a different shock" from the first time, he said. "I knew what to expect, and I thought to myself, 'Oh, for Christ's sake, I have to do this again? ... And I said to myself, 'Arlen, what is, is. You got it.' And on Week Two, I was dealing with it."

Specter does not sugarcoat anything. Although he continues his squash routine, he notes that on the court "my breath is much shorter, I'm perspiring more, and I can't play as long." He adds, "I think there's a vitality in that which is healthy." And although he doesn't cut back on work at all, he does retreat to his Senate hideaway office for extra naps.

And given all the misdiagnoses he's been given in his life, he has one more piece of advice: "Get a second opinion."