(CNN) -- When her mother and father called her into the den, 9-year-old Gigi Pasley thought they were going to tell her a big surprise, "a good surprise" she said, one she'd be delighted to hear. 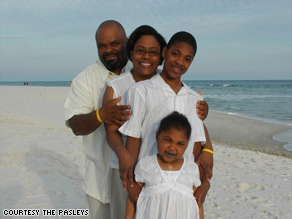 Gigi Pasley, 11, with her parents, Irvin and Jessica, and brother, Myles, has survived leukemia and bone cancer.

But instead, as her father sat next to her on the couch and her mother knelt down beside her, they told Gigi she had cancer. Her reaction was not what her parents expected. She sat quietly, with her head down, for a long time.

"And then she burst out with this awful sound, a moan, a scream of complete and utter agony," said her mother, Jessica Pasley. "She was completely distraught, so much so that my husband, who's a big, tough guy, had to leave the room. He had to walk away."

When she finally managed to talk, Gigi said, "I don't want to die at age 9."

The Pasleys learned that day there's no good way to tell your child she has cancer.

When it comes time to tell a child he or she has cancer, or some other devastating disease, many parents try to skirt the issue.

"They say, 'Well, we'll tell her it's just a cold, or it's just a virus, or we'll tell her she'll have surgery and then everything will be fine,'" said Dr. Lawrence Wolfe, a pediatric hematologist-oncologist at Long Island Jewish Medical Center in New York.

But he said the child always figures it out in the end. "Truth-telling pays off, even if you're clumsy about it," he said.

The American Society of Clinical Oncology and the National Cancer Institute, both of which have guidelines for how to talk to children about cancer, stress the importance of honesty.

"You may want to protect your child, but children usually know when something is wrong," the National Cancer Institute's Web site says. Not telling the truth can lead to more problems. "A child may think he or she has cancer as a punishment for doing something wrong."

When Gigi's bone cancer was diagnosed, the Pasleys knew enough to be straight with her. They'd had experience with cancer: Gigi and her identical twin sister, Jade, were found to have leukemia shortly after their first birthday. Jade died a year later. Gigi beat the disease, only to have a relapse when she was 4 years old. Again, she recovered -- and the cancer returned for a second time when she was 6.

Empowered Patient: Watch more on talking to your kids about illness »

Now 11, Gigi said she appreciates her parents' honesty that night in the den two years ago when they told her about her bone cancer.

"I was upset and really scared when they told me because this time it was a new cancer," she said. "But I was thinking to myself, if I beat leukemia already as many times as I did -- three times -- I can beat this cancer,' and I did."

But the Pasleys didn't tell their daughter absolutely everything. They didn't say that her doctors thought she might have only three months to live, even with aggressive treatment. "We never talk about timetables," Jessica Pasley said. "It doesn't make any sense to us."

Exactly what you say to a child who's just received a terrible diagnosis depends on the illness, the child's personality, and on the child's age. Here are some basic guidelines by age group.

What to tell children up to age 4

Very young children might think they did something to cause cancer, according to the American Society of Clinical Oncology, and need to be reassured this isn't the case.

But often children this age aren't focused on the illness, Wolfe said. Rather, they're focused on their parents and are very sensitive to their behavior.

Since seeing a parent cry might be unavoidable, it needs to be explained to them. "Tell them Mommy and Daddy may be upset about their illness, but you're not upset with them," he advises.

What to tell children from 4 to 7 years old

Wolfe said children this age are more aware of their illness, but their biggest fear probably isn't illness or death -- it's being separated from their parents.

"Explain to them, 'You're sick and going to have to spend time in the hospital. Mommy and Daddy will always be there to comfort you. We're always there for you.'"

What to tell children from 8 to 13 years old

The National Cancer Institute suggests explaining cancer to children this age in terms they can understand. "You might describe the cancer cells as "troublemakers" that get in the way of the work of the good cells," the Web site suggests. "Treatment helps to get rid of the troublemakers so that other cells can work well together."

Wolfe advises also telling children about their illnesses in the context of their own day-to-day life. "If you just say, 'You're very sick and will have to be in the hospital for a while,' that might not speak to the child, because he or she might not understand what 'for a while' means," he said.

"If your child's life, for example, revolves around sports, say, 'You might not be able to do sports as much. We have to curtail your activities to make you well.' Do truth telling in language they'll understand."

What to tell a teenager

Telling the truth is perhaps most important for adolescents, Wolfe said. If they ever sense you're lying, they'll feel as if their illness is even more out of control than it already is.

"Any attempt to soften the blow -- that's where the adolescent loses their footing," Wolfe said. "In order to have their feet on the ground, they need to know the truth."

He warns parents against trying to hide their own grief and sadness, because teenagers might mistake your stoicism for not caring. "If you feel like you have to fall apart, you should fall apart. If parents want to seem to be in control, what could go through the teen mind is that they don't seem to care," he said.

Also, parents should try to prepare themselves for their teenagers' "heart-wrenching" reactions to news of a cancer diagnosis -- reactions sometimes even more intense than those of a younger child.

Wolfe adds that being honest doesn't mean you have to tell your child everything. For example, he said the Pasleys did the right thing by not telling Gigi doctors thought she might have only three months to live.

"I don't think that future-predicting truth telling is necessary -- the kind where you're looking into a crystal ball," he said. "If the child is sophisticated to say, 'Am I going to die of this?' you can answer that it's a possibility, but we're embarking on a plan now to try to keep that from happening."

Gigi's lived way beyond those three months. Nearly two years after her bone cancer diagnosis, doctors can't find evidence of the cancer anywhere in her body.