LONDON, England (CNN) -- Having a big waistline can nearly double your risk of dying early, a major study has found. 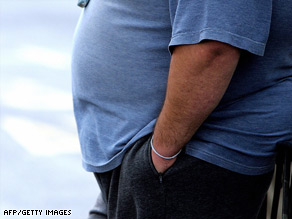 A large waist raises the risk of premature death, a large-scale study in Europe says.

The wide-scale study found that carrying excess fat around the middle increases the risk of early death, even in people not considered to be overweight.

Researchers from Imperial College London, the German Institute of Human Nutrition and other European institutions compared the waist sizes of participants with the same body mass index. They also calculated the ratio of their hip and waist measurements.

Body mass index (BMI) is a formula that expresses body weight in relation to height and is widely used to screen for weight problems. A BMI between 18.5 and 24.9 is considered normal for an adult.

The study in The New England Journal of Medicine found that an increase in waist circumference of about two inches raised the risk of death by 17 percent in men and 13 percent in women.

Large waists may lead to higher mortality risk because fatty tissue around the middle produces hormones and other compounds that can lead to the development of cardiovascular diseases and cancers, the study said.

The authors said a key finding of the research was uncovering the extent of the connection between distribution of body fat and risk of dying early, independent of BMI.

"Although smaller studies have suggested a link between mortality and waist size, we were surprised to see the waist size having such a powerful effect on people's health and premature death," Professor Elio Riboli from Imperial College London, one of the researchers, said in a statement.

"There aren't many simple individual characteristics that can increase a person's risk of premature death to this extent, independently from smoking and drinking," he said.

Researchers did not focus on why some people develop bulging waistlines, but they said anyone with a large waist should increase their daily exercise, avoid drinking alcohol excessively and improve their diet.

They also said hip and waist measurements should be incorporated into routine health checks to identify individuals who may develop health problems.

The study tracked nearly 360,000 participants for about 10 years.

All About Health and Fitness • Death and Dying • Exercise and Fitness