Up to 17 babies given overdoses of blood thinner

(CNN) -- A Corpus Christi, Texas, hospital is investigating how up to 17 babies in a neonatal intensive care unit received overdoses of the blood thinner heparin. One of the babies died. 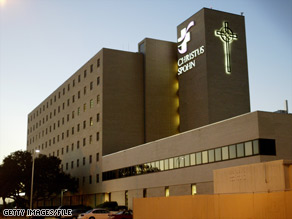 Officials at Christus Spohn Hospital South say corrective action was taken after the discovery of the overdoses.

The infant was one of 17 who may have received a more concentrated form of heparin than was prescribed, Christus Spohn Hospital South said in a statement.

Heparin is an anticoagulant often used to clean the IVs of patients and prevent blood clots from forming in the lines.

It came into the public spotlight last year when newborn twins of actor Dennis Quaid nearly died after receiving an overdose at a Los Angeles hospital.

Nursing staff at the Corpus Christi hospital discovered the problem Sunday -- two days after the medication is believed to have been first administered, according to Bruce Holstien, president and CEO of Christus Spohn Health System.

The hospital said it took corrective measures after the discovery.

A preliminary investigation concluded that "the medication error occurred during the mixing process within the hospital pharmacy," Holstein said in a statement.

The baby who died "was seriously ill, and we do not know at this time what role, if any, the higher than expected concentration of heparin played in this baby's death," Dr. Richard Davis, chief medical officer for the health system, said Tuesday.

"Our deepest sympathy goes out to this family," he said.

Twelve of the 16 other babies remain in stable condition in the neonatal intensive care unit, which cares for ill newborns. Three have been discharged, and one is critical and unstable as that baby has been since admission to the unit, Davis said.

According to standard procedure, nurses were supposed to clean the infants' IV lines with Hep-Lock, a drug containing a small dose of heparin, to allow the lines to flow freely.

However, instead of the 10 units of heparin they were supposed to receive, the twins received 10,000 units -- 1,000 times the prescribed amount.

The babies survived, apparently with no permanent injury, Quaid later told members of a House committee on government oversight, although there is no way to know whether they will show any long-term effects.

All About Corpus Christi • Dennis Quaid