How to find a doctor online

ATLANTA, Georgia (CNN) -- Traditionally, people have found doctors by word of mouth: Find someone you trust, and ask whom they use. 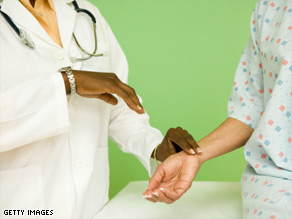 These days, more people are using 'electronic word of mouth' to find a good doctor.

These days, many people are using electronic word of mouth. Put "doctor ratings" into a search engine and you'll come up with a list of sites where people rate physicians and make comments.

Last month, Angie's List -- the place you go to find a good plumber -- joined the club by starting a doctor section, and even Zagat's, the folks who rate restaurants, is launching a doctor rating service.

A lot of doctors aren't crazy about these sites and point out that random, anonymous opinions don't truly measure a physician's quality. But many consumer health experts say these sites are here to stay, and can be helpful if used properly. Here are five tips for smart surfing on physician rating Web sites.

1. Decide what you care about

This is important because many of the comments on these sites have to do with logistics ("a very dictatorial front office" writes one reviewer on ratemds.com about a gastroenterologist) or character ("Dr. X is quite pretentious," writes another reviewer on the same site). Nasty secretaries and a haughty doctor can be bad news if this is someone you'll be seeing often. But if the doctor's going to yank out your tonsils and you're never going to see her again, do you really care that she's full of herself and her office staff is mean?

"The 'what' is as important as the 'who,' " says David Lansky, president of the Pacific Business Group on Health. "If I want a heart surgeon, I'm going to look for different things than if I'm looking for a primary care doctor."

It's a matter of statistics: The more reviews you read, the more likely you are to get an accurate assessment. "I would check a lot of different Web sites," says Carol Cronin, executive director of the Informed Patient Institute. "Look across them, not just within one."

Speaking of volume, a common concern about doctor rating sites is that one angry patient can make multiple nasty comments, using a different name each time (or, conversely, that the physician herself could go on and make multiple glowing comments).

But Martin Schneider, chairman of the Informed Patient Institute, says these sites have ways of detecting when one person is making several comments under different names. Back in the 1990s, Schneider was president of a now-defunct doctor rating site called thehealthpages.com. "Even back then, we had to the technology to stop that from happening," he says.

3. Look for specifics, not adjectives

"A general statement like, 'Dr. Smith is really a jerk,' doesn't tell you much," says Steven Findlay, a health care analyst for Consumers Union. "It doesn't get to the quality of care they deliver."

Findlay says to look for reviews with specific examples of what the doctor did right or wrong. "Let's say someone's writing about how a doctor handled a kidney stone," he says. "You want to know how quickly that doctor got you to an X-ray. How quickly did they assess the X-ray? Did you get the medicine you needed? Did the doctor monitor the case and follow-up?"

Once you've found specifics, look for patterns. Five complaints that say the same thing are statistically more meaningful than five complaints about different issues, says Dr. Robert Wachter, associate chairman of the department of medicine at the University of California, San Francisco.

"If I look someone up and they have five dings all on a similar theme and I have a choice, I'm going to go elsewhere," says Wachter, who blogs on health care quality issues.

5. Use reviews along with objective information

While patient reviews might be useful, they have several clear drawbacks, our experts say. First, many doctors have just a few reviews or none at all. Second, even if a doctor has 20, 30, 50 or 100 reviews, that's still only a small fraction of his entire patient population -- and a warped fraction at that.

You can find out if your doctor is board certified by going to the American Board of Medical Specialties Web site. For information about legal judgments, go to the Federation of State Medical Board's site and click on your state. The National Committee for Quality Assurance can tell you whether a physician has met certain quality standards for treating some medical problems.

One more place to check: your health insurance company, which has access to information about your doctor that no one else has. Several insurers have set up systems to measure physician quality.

But would an insurance company, out of self-interest, recommend the cheapest doctor rather than the best one? Both Findlay and Wachter say while this was a concern in the past, they both say insurance company data on doctors are now trustworthy.