LOS ANGELES, California (CNN) -- The man who police say dressed as Santa Claus and killed nine people at a Christmas Eve party may have also had plans to kill his mother and his former wife's divorce attorney, police said Monday night. 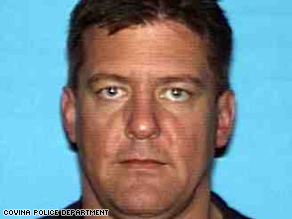 Prime suspect Bruce Jeffrey Pardo, who police said committed suicide hours after he went on a shooting rampage and started a raging house fire in the Los Angeles suburb of Covina, left a rental car with a gasoline canister outside the home of attorney Scott Nord, said Pat Buchanan of the Covina Police Department.

Police previously said that Pardo targeted his rampage at his former wife, Sylvia Ortega Pardo, and her family at the family's Christmas Eve party.

A divorce between the two was finalized in court on December 18 in a "somewhat contentious proceeding," Covina Police Chief Kim Raney said last week. Police believe Pardo planned to carry out a similar attack at Nord's house as he did at the shooting and house fire that claimed nine lives.

Another rented car that Pardo used to flee the scene was found booby-trapped after the shooting, police said. That car burned as the Covina bomb squad was trying to disconnect an explosive device in it, police said.

On Saturday, Covina police released the names of the nine people unaccounted for since the shooting and fire. Nine bodies were recovered from the rubble of the house, but authorities said that they are having to work with dental records to establish identities.

"The bodies were so badly burned they cannot be identified any other way," said Covina police Lt. Pat Buchanan.

The nine unaccounted for include Sylvia Pardo, her parents, her sister, her two brothers, both brothers' wives, and a nephew. Ages of the nine range from 17 to 80, police said.

On Monday night, police said Pardo's mother had also planned to attend the Christmas party, but didn't go because she was sick.

Pardo had a contentious relationship with his mother, according to Buchanan, because she attended the couple's divorce hearing and had sided with Pardo's ex-wife.

The shooting and fire left 10 children orphaned and three others lost one parent. An "Ortega Family Fund" has been set up at Nord's law offices.