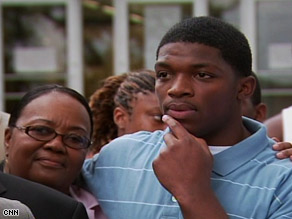 Mychal Bell was released in September 2007 and later agreed to a plea deal in the beating of a classmate.

Mychal Bell, who was arrested last week after allegedly stealing clothes worth $370 from a department store, told investigators he shot himself Monday evening "because he was tired of all the media attention," the report says.

The high school senior's mother and his grandmother also told an investigator that he'd indicated "he did not feel like he could live anymore" because of media coverage of the shoplifting allegations, according to the report.

According to the police report, however, an officer responded to a 911 call from his grandmother's Monroe, Louisiana, home, where Bell lives. The grandmother, Rosie Simmons, told the officer that she had hidden the gun after the shooting "for Mychal's safety so he did not try to shot [sic] himself again," according to the report.

Bell, 18, suffered a wound to the upper right chest, the report says. Powell-Lexing told CNN that Bell had surgery Monday night, and Monroe police Sgt. Cassandra Wooten said the wound was not life-threatening.

Bell was being treated Tuesday at a hospital in Shreveport, Louisiana.

In December 2006, Bell was one of a half-dozen black teenagers who faced felony charges in the beating of a white classmate in the town of Jena, Louisiana, an incident that followed months of racial tensions in the community of about 3,000 people.

The case of the "Jena 6" drew national attention from civil rights groups that said the charges were excessive, and an estimated 15,000-plus people turned out for a September 2007 rally in Jena on the youths' behalf.

Bell eventually pleaded guilty to battery in a juvenile court and later moved to Monroe, about 70 miles north of Jena.

Bell was released on $1,300 bond, and the case was assigned to city court.

On Monday, Simmons and Bell's mother, Melissa Bell, told investigators they heard a gunshot from the teenager's room and found him on the bed, according to the police report.

"Rosie and M. Bell stated Mychal had made comments over the past two days that because of the current media attention he had because of a shoplifting arrest he did not feel like he could live anymore," the police report says.

Bell's Christmas Eve arrest came after security guards at the shopping center were told Bell and a male friend were seen stuffing clothing into a bag in a menswear section of Dillard's, according to the investigative report.

Once spotted, the men split up, police said. Bell, chased by security guards, ran from the store to a parking lot, where he tried to hide under a car, Davis said. As a store security officer tried to pull Bell out, "Bell swung his arms wildly" and hit the guard with his elbow, the report says. Davis said the guard was hit in the face.

Bell admitted to the thefts, which police said included four shirts and a pair of jeans, Davis said. The merchandise was photographed by store security and returned to stock, he added. Bell was taken to jail and booked. Davis said the second man escaped.

Powell-Lexing told CNN her client went to the mall with someone to return a shirt, for which he had a receipt. The person with Bell did the shoplifting, and Bell was caught in the middle, the attorney said.

Powell-Lexing said Bell has been trying to stay out of trouble since the Jena arrest, and that he has been on the verge of getting a college football scholarship.

Bell attends a Monroe high school, but has not been allowed to play high school football since his arrest in Jena, where he was a running back.

In April, after his move to Monroe, Bell told CNN that he wanted to keep his life on the straight and narrow in part because of the support he received during the Jena case.

"I feel like [after] all the people came down and supported me [and] gave money to the defense fund, I feel like ... if I would do something now, I would let the whole country down," he said.

All About Mychal Bell • Jena (Louisiana) • Louisiana • Racism and Bigotry