Report: Police officer deaths down in 2008

(CNN) -- Deaths of law enforcement officers in the line of duty fell sharply in 2008, with the number killed by gunfire reaching its lowest level in more than five decades, according to a report published Monday. 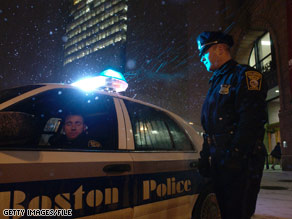 A tougher criminal justice system is among the reasons cited for a less deadly year for police.

The statistics show 2008 has been "one of the safest years for U.S. law enforcement in decades," wrote two groups: the National Law Enforcement Officers Memorial Fund and Concerns of Police Survivors.

Based on preliminary data, the groups found that 140 law enforcement officers were killed in 2008 -- 86 of them accidentally and 54 intentionally.

Just the year before, the group found 181 deaths -- 108 of them accidental and 73 intentional.

"Fewer officers were killed by gunfire in 2008 than in any year since 1956," the report says. "Preliminary data indicate 41 officers died in firearms-related incidents this year, compared with 68 in 2007, a reduction of 40 percent."

In a statement accompanying the report, Craig W. Floyd, chairman of the National Law Enforcement Officers Memorial Fund, said, "2007 was a wake-up call for law enforcement in our country, and law enforcement executives, officers, associations and trainers clearly heeded the call, with a renewed emphasis on officer safety training, equipment and procedures."

He listed reasons for the drop in officer deaths, including better training and equipment; increased use of less-lethal weapons; more officers wearing bullet-resistant vests; and an increased awareness among officers that "every assignment is potentially life-threatening."

Floyd also cited a downturn in violent crime in general and what he called a tougher criminal justice system.

"The reduction in firearms-related deaths is especially stunning, given the tremendous firepower possessed by so many criminals today," Floyd added in the statement.

The report's figures are different from those held by the FBI. For example, the FBI lists 140 law enforcement officers killed in 2007 -- 83 accidentally and 57 intentionally.

The different figures are based on somewhat different criteria. For example, the FBI explains on its Web site that it includes only officers who were "working in an official capacity" at the time of the incident.

Kevin Morrison, a spokesman for the National Law Enforcement Officers Memorial Fund, said his group may include an officer who was intentionally killed, even if he was not working in an official capacity at the time.

Also, Morrison said, "Officers who die of a heart attack while engaging in a foot pursuit -- that may not make it into their report, but it's in ours."

The FBI has not released totals for 2008. Its preliminary report on law enforcement officer deaths in 2008 is expected in the spring.

While the report released Monday is largely about good news, it also includes some grim statistics.

"Deaths of female officers rose sharply to 15 in 2008, equaling the record high of 2002. For the first time, more than 1 in 10 of the officers killed in a single year were women," the report says.

"And while overall traffic-related fatalities declined by more than 14 percent, the number of officers struck and killed rose in 2008 -- despite the increased publicity and enforcement of 'move over' laws and other safety initiatives."

All About Police • Crime