NEW YORK (CNN) -- Former New York City police Commissioner Bernard Kerik pleaded not guilty in federal court Monday to a revised indictment charging him in a corruption and tax evasion case, according to a spokesman for the New York District Attorney. 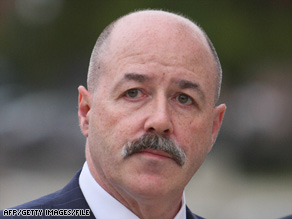 A revised indictment brings to 15 the number of counts against former police Commissioner Bernard Kerik.

Prosecutors allege Kerik received and concealed benefits of about $255,000 in renovations to his Riverdale, New York, apartment from a company seeking to do business with the city of New York.

Revisions to the original indictment, which included charges of corruption, conspiracy and tax evasion, bring to 15 the number of counts against Kerik.

The indictment also charges that Kerik made several false statements to the White House and other federal officials when he applied for the position as adviser to the Homeland Security Advisory Council, to the Coalition Provisional Authority in Iraq and in connection with his nomination to be secretary of the U.S. Department of Homeland Security.

U.S. District Judge Stephen Robinson did not rule Monday on whether the two counts that include charges of lying to White House officials will be tried in Washington or White Plains, New York.

Kerik is due back in court February 3 for a hearing on pretrial motions, Hadad said. A trial date has not been set.

Kerik, 53, is a longtime friend and former protege of former Mayor Rudy Giuliani. President Bush nominated him to be secretary of homeland security after winning re-election in 2004, but Kerik withdrew his name amid allegations that he employed a nanny who had a questionable immigration status.

The former chief pleaded guilty in 2006 to accepting tens of thousands of dollars in gifts while he worked as city corrections commissioner. He was fined $221,000 and avoided jail time under his plea agreement.

Before tapping Kerik for a Cabinet post, Bush dispatched him to Baghdad to train Iraqi police after the U.S. invasion that toppled Saddam Hussein. He left three months into an expected six-month stint, with Iraqi officials telling reporters that he had completed his assignment.

In 2004, he campaigned for Bush's re-election and spoke at the Republican National Convention in New York.

All About Bernard Kerik